Prevents Link from taking damage for a period of time

The Magic Armor is a recurring item in the Legend of Zelda series. While both of the items with this name are able to make Link invulnerable for a while, their designs are quite different.

"It is a magical heirloom...one that calls up a mysterious power to protect your body from harm."
— Zunari

The Magic Armor is a purplish-pink magical jewel that has the ability to make Link impervious to damage for a period of time, based on how much magic power he has at his disposal. To obtain the Magic Armor, Link must either complete the Quest for the Shop Guru Statue (a trading quest that involves Link having to trade special items to other traders around the Great Sea), or win it in the Windfall Auction at the Hall of Wealth after previously winning several earlier auctions.

The Merchant's Oath trading quest is initiated when Link purchases the Sail from Zunari on Windfall Island. Upon his return to the shop, Zunari has used the money he earned from the sale to initiate a trading operation. He asks Link to trade decorative items like plants and flags with Traveling Merchants around the Great Sea in order to obtain new wares for his store. Upon the completion of three successful trades, Zunari is sufficiently pleased with the connections he has been given and gives Link the Magic Armor. While this method of obtaining the Magic Armor is preferable as the trading sequence's conclusion rewards Link with a Piece of Heart, winning it at the Hall of Wealth may be more in the interest of non-completists who simply want added protection for a minor time cost.

When in use, the Magic Armor sends purple energy whisps surrounding and slightly contouring to Link's body, also shaping around his hat, even when the Hero's Clothes are invisible. This may or may not simply be the result of a bug in the game's programming. The item's design and function makes it very similar to Nayru's Love.

The Legend of Zelda: The Wind Waker HD

Although the Magic Armor is received the same way as in the original The Wind Waker, its functionality has changed dramatically. The Magic Armor now consumes Rupees instead of magic, and only when Link is hit, much like the version from Twilight Princess but without the constant Rupee drain. As a result it is the most powerful incarnation of the Magic Armor, providing Link with endless invulnerability so long as he gains more Rupees by defeating enemies and gathering treasure than he loses by taking damage.

"Armor for the richest and most precious customers who value their lives over their Rupees."
— In-game description

The Magic Armor is a complete set of golden-plated armor. It prevents Link from taking damage while equipped; instead of his Heart Containers being drained, Rupees are deducted from Link's total. The Magic Armor also drains two Rupees for each step Link takes while it is equipped. When Link runs out of Rupees, the golden armor turns black and grows heavy, impeding Link's movement, similar to when he is wearing the Iron Boots. Unlike similar damage preventing items in the series, which must be assigned to an item slot and require a moment to activate/deactivate, the Magic Armor in Twilight Princess is activated via the equipment subscreen. This means that the game can be paused and the armor spontaneously activated or deactivated at any time, including while Link is performing another action, and immediately before he is damaged. If Link is hit by his own cannonball while wearing the armor, he will lose every Rupee in his possession.

The Magic Armor is available for purchase at Chudley's Fine Goods and Fancy Trinkets Emporium in Hyrule Castle Town. However, the proprietor, Chudley, has tagged the armor with the price of 100,000 Rupees, which is more Rupees than Link can possibly carry in any of the three different Wallets found in the game. In order to lower the price, Link must donate 1,000 Rupees to Gor Ebizo in the Malo Mart in Kakariko Village. The proceeds are for the restoration of the East Bridge connecting Hyrule Castle Town to Hyrule Field.

Once he has donated this amount, Malo asks for a new donation in order to expand his franchise and buy the shop in Hyrule Castle Town. The required amount is normally 2,000 Rupees, but will be reduced to 200 Rupees if Link aids Gor Liggs' Son by bringing him Hot Spring Water. Link will obtain a Piece of Heart in the process. Once Link has donated enough money to help the cause, Malo promptly buys out Chudley and converts the Hyrule Castle Town shop into one of his Malo Mart branches. He retains Chudley, now known as Malver, as an employee. The Magic Armor can then be purchased for the price of 598 Rupees.

The Magic Armor from Twilight Princess appears as three badges (Magic Armor I, Magic Armor II, and Magic Armor III) that can be crafted at the Bazaar's Badge Market. Each badge reduces damage taken on lightning-element-recommended stages.

The Magic Armor from Twilight Princess may have some connection to the Royal Family of Hyrule, due to the Triforce mark and the helm's similarity to a crown. The pauldrons and helm of the armor also resemble the pauldrons and tiara Princess Zelda is seen wearing. Another possibility is that the armor may have belonged to the Hero's Shade, due to similarities of appearance of the armor. However, Link is the only one who has ever been observed wearing the armor, so evidence linking it to the Royal Family focuses on the ever-present Triforce mark. 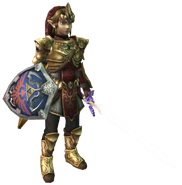 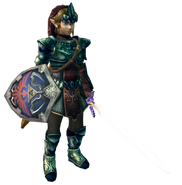