The Legend of Zelda
Majora's Mask
The Wind Waker

"This is the wand that Wizzrobe uses. Wave it to let loose magic spells. What's more, if Link picks up the Magic Book and learns some new spells, he can chant some fiery spells and send out flames."
— The Legend of Zelda manual

The Magical Rod, also known as the Magic Wand, is an item from The Legend of Zelda. It is first obtained in Level 6 during the First Quest and Level 8 during the Second Quest. Link can use the rod to shoot a magical spell resembling those of Wizzrobes that can inflict damage on most enemies. Link can also use the rod to inflict physical damage by simply striking enemies with it like a sword. The attack of the wand, both spells and strikes, is equivalent to that of the White Sword

If the Book of Magic is also in Link's possession, flames will erupt when the spell strikes a wall or another solid object, including enemies. The flames produced are identical to those from the Blue and Red Candles. They can be used to light darkened rooms, and deal the same damage as the candle flames.

The Magical Rod's design somewhat resembles the design and color of the Magic Wand wielded by Wizzrobe in Majora's Mask. 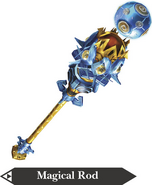 Promotional Render of the Magical Rod from Hyrule Warriors

Render of a Wizzrobe wielding its Magical Wand from Majora's Mask 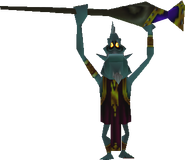 Render of a Wizzrobe wielding its Magical Wand from Majora's Mask

Retrieved from "https://zelda-archive.fandom.com/wiki/Magical_Rod?oldid=486898"
Community content is available under CC-BY-SA unless otherwise noted.