Zeldapedia
Register
Don't have an account?
Sign In
Advertisement
in: The Legend of Zelda: Skyward Sword mini-bosses

"This hand-shaped monster dwells in fiery lava. Its body is made up entirely of flowing magma. As such, it is invulnerable to most attacks."
— Fi

Magmanos is a mini-boss from The Legend of Zelda: Skyward Sword. It is a group of hand-shaped monsters made of liquid magma that reside in the Fire Sanctuary. Physical attacks do not damage Magmanos.

Link can defeat the Magmanos by luring it upwards, then tossing a Water Fruit at it, solidifying its body and making it vulnerable to physical attack. Multiple sword strikes, a Spin Attack, or the damage from a single bomb is enough to destroy a solidified Magmanos. 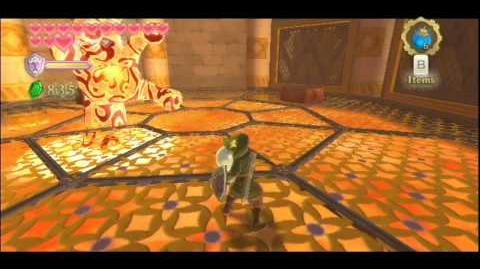 It is possible that the name Magmanos is a portmanteau of the English word "magma", as in lava, and "manos", the plural form of a Spanish word meaning "hand."