Zeldapedia
Register
Don't have an account?
Sign In
Advertisement
in: The Legend of Zelda: Majora's Mask bosses, Final bosses
English

"Remember your battles! When something resistant would deflect your weapons, what was its backside usually like?"
— Tatl

Majora's Mask (ムジュラの仮面, Mujura no Kamen?) is the first incarnation of Majora, the final boss of The Legend of Zelda: Majora's Mask.

After agreeing to play with the Lunar Child wearing Majora's Mask, Link is transported to a room in which the final confrontation with Majora occurs. The first of Majora's three forms is simply a giant version of the mask itself. Before the battle begins there is a brief cutscene in which the Boss Remains materialize out of Link and attach themselves to the walls. Afterward, Majora's Mask awakens, its eyes glowing, and detaches from its alcove, floating out and extending tentacles before beginning the battle with Link.

Majora's Mask will float around the room, hovering in mid-air. Every so often it will turn to lay flat and begin spinning in place rapidly, then launch toward Link to attack. In order to actually damage the mask, Link must first stun it by hitting its back, thus knocking the mask to the ground and temporarily making it vulnerable to a direct assault. Most forms of attack can stun the mask, but it is very difficult to hit the mask in its weak spot with most weapons. The easiest method of stunning it by far is the boomerang-like fins of Zora Link, which are able to go around the back of Majora's Mask and home in on its vulnerable posterior.

Alternatively, the Fierce Deity's Mask may be used, its Sword Beams easily stunning Majora's Mask even from the front. There are also a number of flower symbols etched into the floor throughout the room. Pressing A while standing on any part of one while in Deku Scrub form will cause Link to burrow and later shoot out just like he does with a Deku Flower. He will not extend flowers and glide as he would with a real Deku Flower, but can still launch up to attack enemies. Deku Link can use these flower symbols to both hide from the masks's spinning attack and damage it by launching out from the flower when it spins over him.

After Majora's Mask has taken a certain amount of damage while stunned, the four Boss Remains are called to its aid, and begin to assist the mask by floating around the room, firing orbs of energy at Link. They can be destroyed if they sustain enough damage, with projectile weapons being most effective, as the Boss Remains are often found out of the range of melee attacks. During this second phase of the battle, Majora's Mask uses a fiery laser beam against Link, as well as the aforementioned spin attack. Link may use his Mirror Shield to deflect this beam back at either the Boss Remains or Majora's Mask. The reflected beam will destroy the Boss Remains with one touch, and stun Majora's Mask in the same way as a projectile attack from the rear.

If Link is hit by a laser beam while in his Hylian form, he is knocked to the ground and takes damage. However, the beam proves immediately lethal if Link is hit in either his Zora or Deku form, due to the innate weakness to fire which both forms possess. Goron Link, who is resistant to fire, will be repeatedly knocked down until the beam ceases, but will take no damage from it. The beam can also be avoided by moving away from it until it stops firing, most easily done by using the Goron Mask and its rolling ability. After further damaging Majora's Mask (about six hits beyond the initial three), it transforms into Majora's Incarnation. If the Boss Remains are not destroyed during the fight with Majora's Mask, they will keep attacking throughout further phases of the battle.

Interestingly, the spinning attack will sometimes damage Link, but other times only make him fall to the ground without taking any damage. This could be due to unfinished coding in the game's system. It may also be intended that the attack is tripping Link in some cases as opposed to striking him. 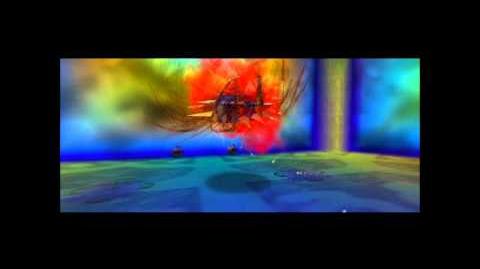