Manhandla first appears in the Valley of Seers, summoned by Cia to destroy the Hyrulean Forces after Volga fails to defeat them. It bombards the allied base with seeds, forcing Link, Impa, Sheik, and Lana to defeat it before confronting Cia herself.

In Cia's Tale "Darkness Falls", Ganondorf summons a Manhandla after Cia's Dark Forces defeat one of his Gohmas; however, it too is defeated, along with the other Gohmas and Wizzro, after he defects to Ganondorf's side.

Another Manhandla appears in Gerudo Desert as a commander of the monster army living there. Along with Gohma, it appears after Ganondorf defeats the Aeralfos generals, only to be defeated in turn. By overcoming Manhandla, Gohma, and King Dodongo, the Demon King earns the allegiance of the other monsters, giving him an army to aid him in his hunt for the Triforce.

Manhandla can produce weaker heads known as Manhandla Stalks, which lack the boss' metallic armor and are only capable of Seed Attacks, thus primarily acting as stationary artillery units that bombard keeps or the battlefield with their Seed Attack. While Manhandla Stalks play a minor role in the Manhandla boss fight in The Sorceress of the Valley, they also appear as enemy units in Adventure Mode and Challenge Mode, using their seed attack to bombard keeps and the battlefield. Like the unarmored Manhandla heads, Manhandla Stalks are also vulnerable to the Boomerang and Gale Boomerang, which can kill them with a single hit.

Lana can also summon Manhandla Stalks as part of her Summoning Gate moveset. These Stalks are capable of performing attacks similar to those used by Manhandla heads, such as their toxic dust attack.

Manhandla appears as one of the bosses encountered in Ganon's Fury. It is vulnerable to Ganon's Burning Breath Boss Attack Item (obtained from defeated Argoroks) and may drop the Fury Horn Boss Attack Item when defeated. The Fury Horn allows Ganon to fire the Manhandla's rapid-fire Seed Attack from his two shoulder horns, which transform into mouths that resemble the unarmored Manhandla Head Stalks.

Manhandla is nearly invulnerable in its normal state, due to its ability to cover its body in metallic armor. It attacks with its four stalks, which can bite, slam, or spit a barrage of seeds at enemies, and by spinning around (either in place or while moving around). It also causes seeds to rain down on the battlefield as long as it lives, which must be dodged by watching for the glowing spots on the ground.

To expose Manhandla's weak spot, its stalks must be stunned by using the Boomerang on them when they turn green (usually before a biting attack or after a seed barrage). When a stalk is stunned, it will retract to the boss's main body and become unable to participate in Manhandla's attacks. Stunning all four stalks removes the beast's armor and exposes its core, allowing an assault on its Weak Point. After a while, Manhandla will recover and the process must be repeated.

When fought in the Valley of Seers, Manhandla will retreat temporarily after losing some of its health. A short time later, its stalks will appear all over the area, forcing players to hunt them down while dodging their seed bombardments. Defeating the correct stalk will force Manhandla to re-emerge, after which it can be fought and defeated normally. 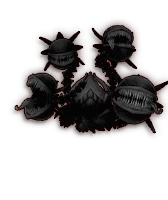 Dark Manhandla is a shadowy variant of Manhandla that appears in certain Adventure Mode and Challenge Mode scenarios. It has the same weaknesses and attack pattern as Manhandla.

Manhandla is based on the eponymous recurring boss in the Legend of Zelda series. It also shares certain aspects of its design with other plant monsters in the series such as Babas (which its Manhandla Stalks resemble), Diababa from Twilight Princess and Kalle Demos from The Wind Waker. It also bears a striking resemblance to Deguchitato from Four Swords.

Given the similarities between Manhandla and its stalks to Babas, both being plant monsters, it is possible that Manhandlas are a species of Baba or are otherwise related. In the Hyrule Warriors series, Manhandla and Deku Babas are both capable of producing poison clouds. Manhandla is also similar to Diababa from Twilight Princess, both being multi-headed plant monsters and bosses. 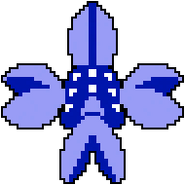 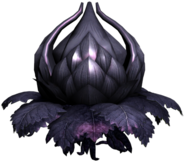