Zeldapedia
Register
Don't have an account?
Sign In
Advertisement
in: Articles with non-canonical information, The Legend of Zelda: Oracle of Seasons bosses
English

Manhandla (テスチタート, Tesu Chitāto?, Testitart) is the boss of the Ancient Ruins, the sixth dungeon in The Legend of Zelda: Oracle of Seasons. As with previous incarnations of the monster, it resembles a large, prehensile plant with four fireball-spitting appendages connected to a central body, which resembles a large Buzzblob. In this game, the appendages are large, red mouths. It bears some resemblance to Piranha Plants from the Super Mario Bros. game series.

The battle against Manhandla takes place in a room containing a large amount of quicksand, which can make it difficult to move and avoid the boss's attacks. Manhandla's mouths are vulnerable only to attacks from the Magical Boomerang. Link must continually throw the boomerang at the mouths, which are only susceptible to damage when they are open. Manhandla's movement speed increases each time a mouth is destroyed. When all of the mouths have been destroyed, Manhandla will move very quickly around the room in a figure 8 pattern. Link can then use the Magical Boomerang repeatedly to stretch the main body of the monster, but he must be careful as he can get zapped for damage if he accidentally strikes Manhandla with the sword in this phase while Manhandla is whole. If he deals enough consecutive hits, Manhandla's body will split in half, revealing its heart. With a single strike from his sword, the heart will be destroyed and Manhandla will be defeated. For his trouble, Link receives a Heart Container and the Blowing Wind. 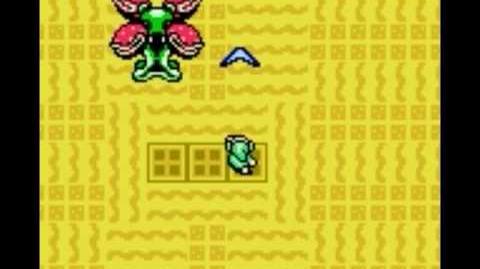 Manhandla appears as an out of dungeon boss. Depicted as a plant with several heads, it attacks Link, Piyoko and Ricky. Manhandla eats Piyoko, but Ricky uses his tornado punch to free him. Link tries to use his sword, but Manhandla's bark is too thick. When Link is trapped by the vines Manhandla produces, he finds an Ember Seed and throws it in to the creature’s mouth, setting it on fire from the inside and killing it.

Like its The Legend of Zelda incarnation, Manhandla's name is a corruption of the word "Manhandle," meaning "to handle roughly".