Manhandla (The Legend of Zelda)

Manhandla (テスチタート, Tesu Chitāto?, Testitart) is the boss of Level 3, the third dungeon in The Legend of Zelda. It is a large, mobile, carnivorous plant with four heads surrounding an invulnerable middle. Each head can also spit unblockable fireballs. To defeat it, Link has to defeat all four heads. He can either slash its heads with his sword or drop bombs near its middle. The more damage Manhandla takes, the faster it moves. Manhandla reappears as a mini-boss in the fourth and eighth dungeons. 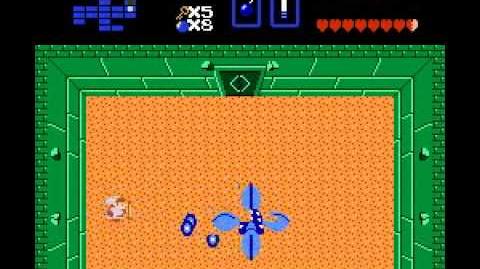 Manhandla's name is a corruption of the word "manhandle", meaning 'to handle roughly'.

Manhandla's 8-bit sprite from The Legend of Zelda is used to represent that series' incarnation of Manhandla on the Adventure Map in Adventure Mode.