"If I was a seagull, I would fly as far as I could! I would fly to far away places and sing for many people! ... If I wish to the Wind Fish, I wonder if my dream will come true..."
— Marin

Marin (マリン, Marin?) is a character from The Legend of Zelda: Link's Awakening. Marin is a human girl who lives with her father, Tarin, in Mabe Village on Koholint Island. She is a good-natured girl who loves to sing and has a strong sense of morality and justice. Throughout the course of the game, Marin and Link apparently develop an attraction to one another, although this is never discussed, nor developed into a relationship.

Marin has one of the first major female roles in the Legend of Zelda series after Princess Zelda; aspects of her personality are found in later characters in the series, possibly as an homage. Strangely, some artwork for the game, as well as her trophy in Super Smash Bros. Melee, depicts and refers to her as a talented harpist, something that is never mentioned in the game.

Having been shipwrecked on Koholint Island after a terrible storm, Link is discovered unconscious on the beach by Marin, who attempts to wake him, but to no avail. Link awakens in Marin and Tarin's house in Mabe Village. Confused after the accident, Link mistakes Marin for Zelda. After being told of Koholint Island by Marin and her father Tarin, Link heads out into Koholint Island to retrieve his lost sword. After Link returns to the village, Marin can be found near the Weathercock, where she sings a song known as the "Ballad of the Wind Fish".

Later, Link encounters some trouble east of Animal Village in the shape of a sleeping Walrus that blocks the entrance to Yarna Desert. The animals of the village tell Link that the Walrus is fond of Marin's singing, so he travels to Mabe Village to find her. In Marin and Tarin's house, Link finds a note from Marin saying that she has gone to the beach. Once there, Marin tells Link that he was the first person from outside the island she ever met. She also tells Link of her dream of becoming a seagull, and fly away from the island to sing to people in other lands. After hearing about the Walrus, she allows Link to accompany her to Animal Village. During this time, Link can go to many places where the Photographer will take a photograph of him and Marin. This included watching the ocean from Toronbo Shores, a group photo with Tarin near the Weathervane at Mabe Village, and shortly after Marin and Link fell into a well at Mabe Village (with the last one humorously having her land on Link in a very painful manner). Marin is also skilled at playing mini-games, something she will demonstrate if Link takes her to the Trendy Game shop.

After waking the sleeping Walrus, she goes back to Animal Village and sings to the animals there. If Link obtains the Ocarina and talks to her, she teaches him the "Ballad of the Wind Fish". Marin seemingly stays in Animal Village until Link finds her stranded on a bridge on top of the Tal Tal Mountain Range. He rescues her by using the Hookshot. Her plan was to go to the Wind Fish's egg and make a wish to the Wind Fish. Before she is able to explain what her wish was, Tarin appears and tells her to come home with him.

After Link gathers all the eight Instruments of the Sirens, he plays the "Ballad of the Wind Fish", opening the egg of the Wind Fish. Inside, Link encounters and defeats the Nightmare DethI. After the battle, the Owl appears and brings Link before the Wind Fish, now free. For one last time, Link plays the "Ballad of the Wind Fish", awakening the Wind Fish. As all of Koholint was but a dream of the Wind Fish, the land and all of its people disappear; Marin is shown singing in Mabe Village as the world dissolves. However, in a secret reward ending, if a player completes the game without losing a life, Marin, with wings, appears on the "The End" screen after the player waits a short while. In the DX version, this is altered. Instead, a portrait of Marin shows up, then dissolves to reveal a seagull behind it. This implies that her wish to become a seagull to sing and bring joy to others was granted.

Marin appears as a trophy. The trophy description states that she holds fast to the ideals of truth and honor, mentioning that if Link happens to steal something during his adventure, she will greet him by shouting "THIEF!"

Since Marin loves to sing and her father has a name similar to hers, it is possible that Marin and her father inspired the characters Malon and Talon from the later game The Legend of Zelda: Ocarina of Time; the two also bear a slight physical resemblance. Nayru, the titular Oracle from The Legend of Zelda: Oracle of Ages, shares Marin's ability to seemingly entrance animals with her song. Other characters that may have been modeled after her include Ilia from Twilight Princess (who like Marin is a Human female and potential love interest to Link) and Zelda from Skyward Sword (who is depicted as a harpist and singer like Marin).

In the character design notes for Aryll inside the Zelda Box's book, Eiji Aonuma said that Aryll was originally going to be named Mariru (マリル) to be similar to Marin and Malon from Ocarina of Time. As such, certain similarities between Aryll and Marin can be explained, such as their affinity for seagulls and the red hibiscus in Marin's hair that appears on a pattern on Aryll's dress. Coincidentally, similar to how Marin was mistaken for Zelda by Link in the beginning of Link's Awakening, Aryll ended up being abducted by the Helmaroc King due to it mistaking her for Tetra (who in reality was Zelda).

The surname Marin is believed to have been derived from the Latin word Marinus, a general term for subjects pertaining to the sea. This name could be a reference to her living on an island, or her love of seagulls. 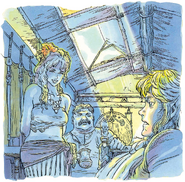 Artwork of Marin, Tarin and Link

Marin and Link on a cliff at the Toronbo Shores

Marin, Tarin, and Link in front of the Weathercock 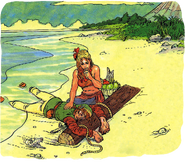 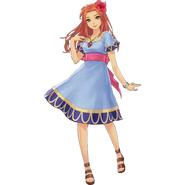 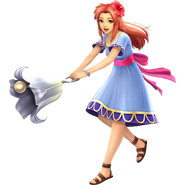 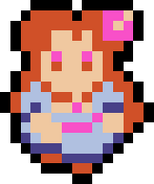 Retrieved from "https://zelda-archive.fandom.com/wiki/Marin?oldid=541907"
Community content is available under CC-BY-SA unless otherwise noted.