Masks are recurring items in the Legend of Zelda series. Masks usually have different properties that are activated when Link wears one. In some games, masks play a greater role than in others.

There is a side quest Link can complete to obtain the Mask of Truth. Once the Happy Mask Shop in Hyrule Castle Town opens, Link can borrow a mask from the shop in order to sell it to someone else and return the money to the Happy Mask Salesman. Once Link manages to sell four of the masks, he is given the Mask of Truth. By this time, Link can also switch between the different masks.

The Mask of Truth can be used to listen to the various Gossip Stones scattered throughout Hyrule. They each tell Link random facts; some facts are more important than others. Additionally, it can be used (prior to traveling to the future for the first time) to obtain a Deku Nut carry limit upgrade on the Forest Stage. 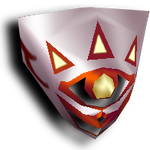 Masks are an essential part of The Legend of Zelda: Majora's Mask. Other than the eponymous Majora's Mask, there are twenty-four collectible masks, four of which transform Link into an entirely different race. These masks are the Deku Mask, Goron Mask, Zora Mask, and the Fierce Deity's Mask. The other twenty masks serve lesser purposes, only used in brief portions of dungeons or for a side quest. Three of the four transformation masks, as well as the Gibdo Mask and Kamaro's Mask are made from purifying someone with the "Song of Healing", which in turn results in a mask. If Link gives the Lunar Children all of the non-transforming masks, he will receive the Fierce Deity's Mask from the fifth lunar child.

The Doggie Mask is part of the trading quest for the Noble Sword. If Link trades a Tasty Meat to the Happy Mask Salesman, he receives this mask. Link then can trade it with Mamamu Yan for a Dumbbell.

The Hero's Charm allows Link to see an enemy's health. Unlike the other masks in the series, this one is equipped not as an item, but through the equipment sub-screen.

Also, in the Nintendo Gallery in Forest Haven, on the wall behind Carlov the Sculptor; there can be seen the Bunny Hood, the Goron Mask, the Keaton mask, and a fourth mask that looks very similar to the All-Night Mask.

Mayor Hagen collects masks and has many of them on the wall in his home. Identical masks can also be found on the Royal Hyrule Library's walls. The masks can be knocked over if Link uses the Pegasus Boots to ram into the wall, and occasionally drop Rupees. A book called A History of Masks can be found by Link in Mayor Hagen's Lakeside Cabin and must be brought to the Royal Hyrule Library in order to progress in the game.

After Wolf Link obtains the Ordon Sword and Ordon Shield for Midna, upon entering the Twilight Realm, Midna can be seen wearing the Ordon Shield on her face as a Mask, before she puts it away for safekeeping. Shadow Beasts wear similar shield-like Masks on their faces as well.

Also seen in the game are enemies called Zant Masks, large animated replicas of the mask worn by Zant. The Fused Shadow also resembles a mask, helmet, or headdress of some kind.

Several masks can be worn by Link as head armor, granting different stats or effects. Kilton the monster researcher who runs the Fang and Bone, stocks several masks based on monsters. These masks allow Link to disguise himself as different monsters, causing them to view Link as one of their own kind and not attack unless hit. Some masks are part of armor sets like the Radiant Mask, Stealth Mask, and Gerudo Veil, which grant certain bonuses when worn with the entire set. The Gerudo Veil is referred to as a mask in its description and is worn by Link along with the Gerudo Top and Sirwal to disguise himself as a woman to enter Gerudo Town. The Thunder Helm is a lightning proof mask-like helm traditionally passed down among Gerudo Chieftains and is the only armor capable of withstanding Vah Naboris' artificial lightning. The Ancient Helm is a mask-like helmet designed by Robbie and crafted by the Ancient Oven Cherry using Ancient Materials acquired from Guardians. The Rubber Helm is a mask-like helmet that resembles a Fish and grants Shock Resistance due to being made of rubber, an ancient material lost to modern day Hyrule.

Several featuring masks returns in the game in reference to previous titles. Link can obtain two of them them by using the amiibo Rune with different amiibo. The Fierce Deity Mask is a special head armor from the "Fierce Deity" equipment along with the Armor, Boots and Sword obtained with the Link Majora's Mask amiibo of the Legend of Zelda: 30th anniversary series. The Sheik's Mask based on Sheik is obtained with Sheik amiibo and makes Link resemble Sheik if worn with the Stealth Chest Guard and Tights. Three featuring masks can be obtained upon installation of the DLC pack The Master Trials and completing a few new side quests. The Korok Mask resembles the leaf mask worn by Makar and allows Link to detect hidden Koroks. Midna's Helmet is a reference to the piece of the Fused Shadow worn by Midna in her cursed imp form and grants the Guardian Resist effect which makes Link more resistant to Guardian attacks. The Majora's Mask functions like a an all in-one-version of the monster masks sold by Kilton. Phantom Ganon Skull, Ravio's Hood, and Zant's Helmet appear as part of "The Champions' Ballad" DLC. Phantom Ganon Skull increases Stealth is part of the Phantom Ganon set, while Ravio's Hood increases sideways climbing speed, and Zant's Helmet grants Unfreezeable status preventing him from being frozen by ice attacks or weapons, though it lacks Cold Resist thus he will still be affected by cold temperatures even while wearing it.

In the Majora's Mask Pack DLC, in the Termina Map in Adventure Mode, there are mask costumes for some characters to unlock:

Mask is the weapon moveset used by Young Link.