Zeldapedia
Register
Don't have an account?
Sign In
Advertisement
in: The Legend of Zelda: The Minish Cap bosses
English

"Constructed by the Wind Tribe to repel intruders, this sturdy machine cannot be destroyed by any external force."
— Figurine

Mazaal (オーイス, Ōisu?) is the boss of the Fortress of Winds, the third dungeon in The Legend of Zelda: The Minish Cap. It was built by the ancient Wind Tribe to protect the shrine on the top of the fortress and the Ocarina of Wind that rests there. Mazaal consists of a golden colored head, split in two halves, one red and one blue. Each color also has a mechanical hand to represent it. While the hands specialize in combat, the head acts as a command module, though it can also attack on its own. However, as each half of the head is interconnected to its respective hand, it will shut down if the hand is brought down. If both hands are brought down, Mazaal completely shuts down for a short while.

Link must use his recently acquired Bow to shoot the eye-shaped weak spots on Mazaal's hands. When these hang out after being shot, Link must then slash at them until they are damaged enough that Mazaal's face shuts down. Link must then turn Minish-sized by using the nearby portals and enter Mazaal's head through its mouth. Inside are six pillars, out of which one will be glowing. By striking this pillar with the sword, it breaks, and Link must exit the head to repeat the strategy. If he does not exit by himself, a miniature sentry will carry him out.

Mazaal's hands can grab Link and crush him or slam him into the ground. They can also summon Beetles, or cause rocks to fall from the ceiling by violently slamming the ground on their own. The head uses its "eyes" to fire beams of energy at Link. The blue eye will fire an electrocuting beam across the room, while the red eye fires a beam that not only causes damage, but also shrinks Link to Minish-size.

Once one pillar is down, the head begins to crumble from the inside, which requires Link to use his Mole Mitts to navigate through the debris. By repeating this strategy and destroying a total of three pillars, Mazaal will be defeated. 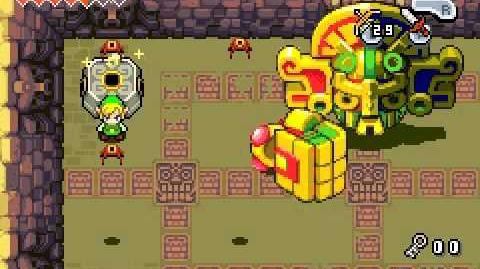