Zeldapedia
Register
Don't have an account?
Sign In
Advertisement
in: Articles with non-canonical information, Rito, Sages,
and 3 more
English

Spoiler: Sages of the Master Sword

"Link... Thanks to you, I've been awakened to the knowledge that I'm a sage of the Earth Temple. There's actually something that I can do to help this world. It's incredible... I bet my teacher knew all about this... Link, please... You must take me to the Earth Temple."
— Medli

Medli (メドリ, Medori?) is a character from The Legend of Zelda: The Wind Waker. A member of the Rito, she trained long and hard under Prince Komali's Grandmother in order to be given the task of becoming the attendant to Valoo, the guardian deity of the Rito and of Dragon Roost Island. Despite her training for that specific task, with the help of Link, she eventually discovers that she is the Sage of Earth.

Medli is a very dedicated young girl, putting effort into everything that she does. Her greatest treasure is the harp that she carries on her back. It is said that she is almost like a motherly figure to Prince Komali, due to her caring deeply for him. Komali, in turn, treats her like his own mother because his real mother may have passed away, as she is never seen in-game.

Her clothing bears the Mark of Nayru, likely due to its use as a symbol of the Zora.

Medli was born a Rito, and early in her life, began training to become the attendant of Valoo, the guardian dragon-deity of the Rito. She studied under the mother of the Rito Chieftain and grandmother of Prince Komali, a wise and respected woman who had a strong bond of mutual respect with Valoo. However, the evil mystic Ganondorf eventually escaped the seal he had been trapped inside and released an evil creature into Dragon Roost Cavern, the volcano's crater located directly below the seat of Valoo, often grabbing on his tail. The creature tormented and enraged Valoo, causing many hardships for the Rito. When Prince Komali's Grandmother passed away, Medli was left as the only Rito whom Valoo trusted. However, she doubted her own abilities.

Eventually, the hero Link arrives at Dragon Roost Island and enters the Rito sanctuary. Medli introduces herself to Link, and gives him a letter from the Chieftain to his son, Prince Komali, and tells him to meet her near the entrance to Dragon Roost Cavern. The bridge connecting the Rito settlement to the cavern has been broken and the spring that once flowed there has been blocked by a volcanic rock. Link helps Medli enter Dragon Roost Cavern by throwing her against the far side of the bridge, allowing her to ride the wind. She gives Link a bottle and ventures up to the summit of Dragon Roost Mountain. Link uses the bottle to rejuvenate a Bomb Flower, which he in turn uses to crush the volcanic boulder, allowing him to swim across to the now-full pond and enter Dragon Roost. Link encounters Medli at the top of Dragon Roost Island where she has been imprisoned by Bokoblins. Link rescues her, and she tells him about the entire situation with Valoo. She also gives him a Grappling Hook. Link uses the Grappling Hook and defeats the creature that has been tormenting Valoo. As his reward, he is given Din's Pearl, Prince Komali's heirloom.

Later on, in order to restore the Master Sword to its full power, Link sails the Great Sea in search for a successor to the line of Earth Sages. Link arrives at Dragon Roost Island and plays the "Earth God's Lyric", a song he learned from the last Sage of Earth, Laruto, to Medli. She briefly loses consciousness, sees Laruto in a vision, and awakens as the Sage of Earth. She aids Link in proceeding through the Earth Temple, and after passing many hardships of the Earth Temple, Link fights Jalhalla and restores the edge of the Master Sword. After Link has completed the Earth Temple, he can see Medli playing the Earth God's Lyric repeatedly on her harp in the room where the Jalhalla battle occurred as a prayer to Din to restore the Master Sword.

After the defeat of Ganondorf, Medli, as well as Makar, can be seen on Tetra's Pirate Ship, celebrating Link's victory in the credits.

Medli is one of the few characters other than Link that the player can control. If Link conducts the "Command Melody" near Medli, the player will be able to control her; however, this only applies in the Earth Temple. The player can press the A button to cause Medli to take flight, and hit it again repeatedly in order to keep her in the air for a short while. This can be used to cross chasms and the like. Also, if Link picks Medli up while on a ledge, he can jump off with Medli to glide across. While holding her, Link can also throw Medli, but if she is thrown into a wall, she will hit the wall, fall down and get stunned. Link helps Medli get to the entrance of Dragon Roost Caver, which requires him to throw her off a small ledge so she can fly to the entrance's ledge. If she hits a wall, she'll be dizzy for a short time and if Link talks to her, she'll say a few slightly weird things.

The harp that she carries can also reflect and store strong beams of Sunlight, a function shared by the Mirror Shield. This can be used in conjunction with the Mirror Shield in order to shine Sunlight on distant targets, targets around corners, or on special targets requiring two beams.

"A world of tiny islands strewn across a vast sea... A girl belonging to the race of Rito used her wings and treasured harp to help the hero who traveled the Great Sea in the world of the Wind Waker. Hailing from Dragon Roost Island, Medli may be a tender-hearted and courteous attendant to the sky spirit, but she fings great courage in the face of danger. When she plays her harp, she can manipulate the very wind itself to attack enemies in a wide area. Aside from this, she can sprout her wings from her arms to attack enemies both high and low!"
— Medli, Sage of Earth Historical Entry Tutorial Bio 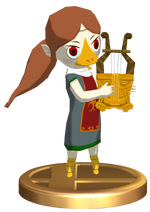 Medli is featured as a sticker. Her sticker gives a +9 bonus to leg attacks. Medli also appears as a trophy. 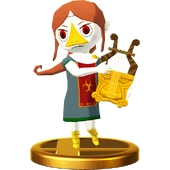 Medli once again appears as a Trophy in Super Smash Bros. for Wii U.

In The Legend of Zelda: Breath of the Wild, the Divine Beast Vah Medoh is named after Medli as the Sage of Earth. Thus its chosen pilot is the Rito Champion Revali.

Artwork of Medli from The Wind Waker HD