Medusa Head, also known as Medelock (メデロック, Mederokku?), is the boss of the Sword & Shield Maze, the eighth dungeon in The Legend of Zelda: Oracle of Seasons. It guards the Changing Seasons, the last of the eight Essences of Nature. It is the only boss fought in the subterranean land of Subrosia and the only boss besides General Onox and Dark Dragon who has not appeared in an earlier game.

Medusa Head shoots fireballs from its mouth, fires lasers from its eyes, and a wave that can turn Link to stone if it hits him, which must be dodged by moving along the lower wall of the room and by using the Roc's Cape; if petrified, Link will be left vulnerable for a few seconds before freeing himself. Throughout the battle, it will teleport across the room, often attacking immediately afterward. In order to defeat it, Link can use the Hyper Slingshot to shoot it with Pegasus Seeds, leaving it stunned for a short while and vulnerable to attack. It may also be damaged if it is hit by the sword when situated in the middle of the room. After several hits, Medusa Head is defeated. 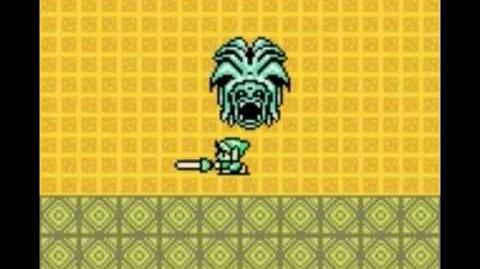 The Medusa Head appears to be based on Medusa, a creature from Greek mythology, who has the ability to turn people to stone when one looks into her eyes. Medusa is at one point decapitated by the hero Perseus, and her head is thrown into the Red Sea. Pegasus was born when Medusa was killed, which may explain why the Pegasus Seeds are so useful against Medusa Head.

Retrieved from "https://zelda-archive.fandom.com/wiki/Medusa_Head?oldid=529833"
Community content is available under CC-BY-SA unless otherwise noted.