The Misery Mire is the sixth dungeon in the Dark World, and the tenth overall, in The Legend of Zelda: A Link to the Past. It is located in the Swamp of Evil in the very southwest corner of the Dark World. Its Light World equivalent is the Desert Palace.

On his quest to free the Seven Maidens, Link enters the Swamp of Evil, which is inaccessible from the Dark World. Using the Flute, he transports himself to a small plateau in the Desert of Mystery where two black stones can be found. He lifts one of these stones with the Titan's Mitt to discover a Dark World Portal. Stepping onto the portal, Link is transported to the south-western edge of the Swamp of Evil. He finds the entrance to the dungeon locked and uses the Ether Medallion to open the door and stop the seemingly never-ending downpour in the area. Inside the dungeon, Link obtains the Cane of Somaria and battles Vitreous. Victorious, he then frees the sixth Maiden.

Misery Mire consists of one main floor as well as two basement floors. The main puzzle in this dungeon is in the area near the Boss Key. Link must light four Torches; however, they are in two different rooms. The primary treasure item located inside the Misery Mire dungeon is the Cane of Somaria. The boss is Vitreous, a giant eyeball with the ability to shoot bolts of lightning from its pupil.

Enemies called Wizzrobes are introduced in this dungeon; Beamos, which have not appeared since the Desert Palace, return. 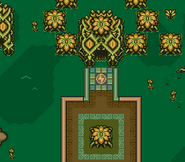 The entrance to Misery Mire
Add a photo to this gallery
Retrieved from "https://zelda-archive.fandom.com/wiki/Misery_Mire_(A_Link_to_the_Past)?oldid=476435"
Community content is available under CC-BY-SA unless otherwise noted.