Thousand-Year Arachnid: Moldarach (千年甲殻蟲モルドガット, Chitose Kōkaku Mushi Morudogatto?, Millennium Crustacean Insect: Moldgat) is the boss of the Lanayru Mining Facility, the third dungeon from The Legend of Zelda: Skyward Sword. Moldarach is an Aracha that has survived its extremely long larval stage. An identical arachnid can be found as a mini-boss in the Shipyard.

In order to damage Moldarach, Link must swing his sword either horizontally, diagonally or vertically, depending on the orientation of Moldarach's pincers. Moldarach attacks Link by grabbing him with its pincers, then by striking him with its stinger. Once a pincer has sustained enough damage, it will fall off.

When both pincers have been rendered useless, Moldarach's prime weakness will instead be its eye. It will then change its attack strategy to jabbing with its stinger or ramming with its head. When charging the jab attack, its eye will turn red, signifying the weakness. Link must stab the eye at this point, but he can also stab it when it is not charging this move. If it does manage to successfully charge, a side-jump or backflip is enough to successfully dodge. When it burrows under the sand, it will attempt to get under Link, and if successful it will jump up from under him, damaging him, and immediately transition into a charge. Link must use the Gust Bellows to reveal it before it jumps up and charges. Link will occasionally uncover Aracha from the sand, who will follow and distract him.

When it is defeated, the sand in the room drains, revealing an unused turntable for mine carts, as well as a route leading to the Temple of Time.

The Moldarach found in the Shipyard does slightly more damage than the one in the Lanayru Mining Facility, most likely to compensate for the increased sword damage upgrade from Farore's Flame. Also, as opposed to the Lanayru Mining Facility Moldarach, which seemingly senses Link's presence and burrows out to face him, the Shipyard Moldarach is awakened when Link blows the sand with the Gust Bellows. 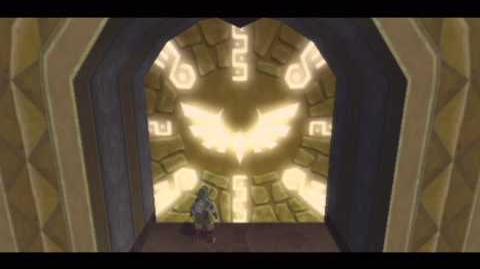 The name Moldarach is likely a portmanteau of "mold", loose soil, and "arachnid", because it is a scorpion. The "Mold" in its name may also be a reference to Moldorms due to its digging abilities. Its Japanese name "Millennium Crustacean Insect" is slightly inaccurate as insects have six legs, whereas arachnids have eight legs.