This article is about the prominent object from Majora's Mask. For the phases of the Moon from The Wind Waker, see Lunar Phases.

The Moon is a prominent part of The Legend of Zelda: Majora's Mask. Before the events of the game, the Skull Kid used the power of Majora's Mask to direct the moon on a collision course with Termina. The Moon approaches Termina slowly before a seemingly inevitable impact on the Final Day. Some of the people of Clock Town flee in an attempt to escape the collision, some do not believe it will fall, and others are resigned to the impending cataclysm. The moon has an enraged or perhaps insane facial expression throughout the game. Interesting to note is that the Moon (in the Japanese version) seems to have a dim way of talking as hinted in its limited speech.

Shortly before Link's arrival in Termina, valuable stones known as Moon's Tears began falling from the Moon's "eyes". Experimental plans for a trip to the Moon using "bomb powered flight" can be located within the Bomb Shop. It is possible that this isn't the actual moon however, but rather an embodiment of Majora's magic. Alternatively, it is possible that this moon is different from a regular moon, in terms of size and appearance. It is also possible that Majora somehow changed the moon by using its dark magic. This would explain the strange features both from afar and up close. Oddly enough, a rainbow is left by the Moon after Majora's defeat.

Prior to the events of Majora's Mask, the little imp known as the Skull Kid ambushed the mysterious Happy Mask Salesman in the Lost Woods, and, in his pack, found a mysterious mask known as Majora's Mask. Gradually, the mask began taking control of the Skull Kid, turning his petty tricks into acts of great malice. Once Majora had completely overpowered the Skull Kid, the being used its power to pull the Moon from its orbit, directing it to crash into Termina. The Moon would destroy Termina completely if not stopped.

The hero, Link, on a journey to find a lost friend, is ambushed by the masked Skull Kid in the Lost Woods. He follows him into Termina, where he is confronted by the looming Moon. Link works together with Tatl the fairy to prevent the terrible catastrophe. They both free the Four Giants from their dungeons and summon them atop the Clock Tower by playing the "Oath to Order". The giants appear and halt the Moon's descent just before it reaches the Clock Tower.

Majora's Mask casts aside the Skull Kid, saying a puppet that outlives its usefulness is mere garbage. It then transports itself to the Moon, takes control of it directly, announces its intention to "consume everything", and renews the Moon's descent onto Termina. As the giants struggle to keep the Moon back, Link decides to follow Majora to the moon. Tatl is initially reluctant to follow, but after Tael offers to go along in her stead, she resolves to follow Link to the Moon. After a final battle with Majora, Link and Tatl exit the Moon just before it vanishes into a bright light. Now that Termina is saved, Link continues his journey.

Despite its rocky appearance from Termina, the Moon consists of a strange, sunny field with a lone tree in the center. Running around the tree are four Lunar Children, each wearing one of the four boss masks. There is also a child sitting underneath the tree wearing Majora's Mask. While the other four children are running and playing with each other, they ignore the Majora child.

At this point it is possible to complete four optional Moon Dungeons or advance straight to the end boss fight. It is only possible to complete all four of the mini-dungeons if the player has collected all of the masks in the game, as each child must be traded a specific number of non-transformation masks in order for Link to enter one of the mini-dungeons. Once they have the amount they want, they offer to play "hide and seek" with Link. Link is transported to one of the four dungeons (according to which child he talked to). Each dungeon is no longer than a few rooms, and contain Gossip Stones that reveal the location of certain masks, as well as one Piece of Heart for each mini-dungeon. At the end of each of the dungeons, the masked child can be found, requesting more masks. After the child has been given enough masks, or if Link cannot provide them, Link is transported back to the sunny field, and the child does not reappear.

Once Link has traded away all of his non-transformation masks and all of the Lunar Children are gone, only the child wearing Majora's Mask remains. This child asks Link if he wants to play a game of "good guys against bad guys" with him. The child will then transport Link to a mysterious arena in which Majora's Mask engages him in battle. If Link has successfully gathered and traded away all twenty regular masks, the Majora Child will present Link with the Fierce Deity's Mask before transporting him to the arena.

A sculpture of what appears to be the Moon sits behind the counter of the Nintendo Gallery. Also, the face of the moon is seen in various spots inside the Tower of the Gods. The different phases of the moon also determines what Legendary Pictograph that Lenzo sells, as well as which sector of the Great Sea in which the Ghost Ship appears. Furthermore, showing Kamo a color pictograph of his favorite thing, the full moon, results in Kamo rewarding Link with a Treasure Chart, leading him to a Piece of Heart.

A statement from one of the Twins indicates that the Moon did not look like this prior to the actions of the Skull Kid. It is unknown if the Moon had a face at all before the events of the game. However, it is notable that Shikashi who has a telescope the twins likely had not, did not give remarks pertaining to this "new moon" that appeared since the Skull Kid started his newest pranks. The astronomer has been enamored with the moon since childhood, and he states that the Moon has long been considered a mystical body which people have worshiped and feared. If he really was so enthralled with the moon, then he would have likely mentioned the hypothetically new moon to all of the Bombers, seeing how his astrology is the hangout of the Bombers. It is possible that everyone in Termina (aside from knowing the Moon was drawing closer to them) already learned about the Moon's new face however, and was thus nothing new to them by the point Link started his adventure there. In fact, when Shikashi was talking about the Moon's Tear, he stated that they have "lately" been blazing from the surface of the moon. This further implies the Moon did not initially have a face. 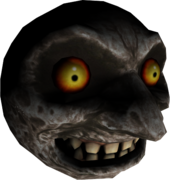 In The Shadow King story scenario, Midna, Agitha, and Lana summon the Great Fairy's aid in weakening Argorok. When the Great Fairy's effort to subdue it with a magic clawshot chains also fails, she fires another magic clawshot chain into the sky, pulling the Moon towards the flying Argorok which is hit from behind right by the Moon's nose. This weakens the dragon to the point it is unable to fly away allowing the Hylian army & their allies to defeat the beast. After Argorok is injured, the Moon is revealed to actually be made up of several of the Great Fairy's fairy minions. When the Hookshot is upgraded to the Clawshot, a smaller Moon briefly appears as a finishing blow, an attack which can also destroy boulders and Beamos.

The Moon also appears as the special attack for Link's Great Fairy moveset, where the Great Fairy summons the Moon to crush enemies.

The Moon also appears as the focus spirit attack in Young Link's moveset, obtainable via the Majora's Mask DLC pack. While using Focus Spirit, Young Link dons the Fierce Deity's Mask and when the Focus Spirit Attack is used, Skull Kid wearing Majora's Mask appears followed by Tatl & Tael, summons the Moon which Fierce Deity Link stops by slicing it clean in two with his sword.

As part of his Ocarina moveset, Skull Kid will summon a smaller Moon which he kicks around like a soccer ball before launching it, creating a huge crater as his Focus Spirit Attack. Also the design of his Lunar Ocarina (Level 2 Weapon) is based on the Moon.

There is also a Fairy Clothing option called Moon's Aura which is an aura designed to look like the Moon's artwork from Majora's Mask 3D.

In the early development of Majora's Mask, the Moon was apparently faceless. In an interview with Shigeru Miyamoto, was revealed that there was originally going to be an enhanced fishing mini-game, where Link could catch Hylian Loach to slow down the Moon's descent.

The Moon appears in the background of the Termina: Great Bay stage. As time passes, the Moon draws closer and closer to the stage, later getting pushed back into the sky by the Four Giants. The Moon is also a trophy in this game.

The Moon appears as a Assist Trophy in Super Smash Bros. Ultimate. When summoned, the Moon appears in the background of the stage and flies straight into the stage, dealing repeated damage to fighters it hits before eventually exploding, launching them away. 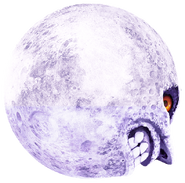 Artwork of the Moon from Majora's Mask 3D

The Moon in The Shadow King cutscene from Hyrule Warriors
Español Italiano
Community content is available under CC-BY-SA unless otherwise noted.
Advertisement