Zeldapedia
Register
Don't have an account?
Sign In
Advertisement
in: The Legend of Zelda: Ocarina of Time bosses
English

"Master of the Water Temple. It has absolute control of water. Pull out its nucleus and attack it!"
— Navi
"Link! Look out! That isn't normal water over there!"
— Princess Ruto

Giant Aquatic Amoeba: Morpha (水棲核細胞モーファ, Suiseikaku Saibō Mōfa?, Aquatic Cell Nucleus: Morpha) is the boss of the Water Temple, the sixth dungeon in The Legend of Zelda: Ocarina of Time. It is a large, amoebic creature consisting of a main nucleus surrounded by blue cytoplasm. The nucleus is able to manipulate the water in a pool, allowing it to grab, constrict, or strike Link.

Not much is known about Morpha, but apparently it caused Lake Hylia to dry up and Zora's Domain to freeze and is implied to be the result of the curse placed on the Water Temple by Ganondorf. After Link defeats Morpha, the water in Lake Hylia rises back to its normal level, and Link receives the Water Medallion from Princess Ruto, who has awakened as the Sage of Water. It is also said that Zora's Domain can now begin thawing.

When Link first enters the Water Temple boss room, he receives a warning that the water in the room is not normal water. Morpha appears once Link sets foot on one of the four center platforms in the pool. The only way to defeat the creature is to destroy its nucleus. Since it never leaves its pool, Link must reel in its nucleus with his newfound Longshot. During the battle, Morpha attacks by using the water in the pool to create large tentacles it uses to grab Link, swing him around, and toss him far to a corner of the room, causing him to lose several hearts. If Link falls into the pool, Morpha, who is not affected by the water's resistance, will continue to attack him until he manages to escape the pool.

After Morpha's nucleus is injured enough, the core will burst in a spray of water. The tentacle will cling to life as long as it can by using up all the water in the central pool, and by attempting to drain and escape through the ceiling. Once it sucks up all the water in the pool, the tentacle will culminate in a single water droplet on the ceiling and drop to the floor, splattering in all directions.

Another, faster way of defeating Morpha is to try to trap its nucleus in one of the four corners, allowing Link to continue to hit it without the nucleus escaping back into the water. Additionally, Morpha's tentacles cannot reach Link if he is standing in one of the room's corners.

Interestingly, the Hookshot is enough in terms of the tools needed to defeat Morpha, as Link only has access to the Hookshot in the Boss Challenge in Ocarina of Time 3D. 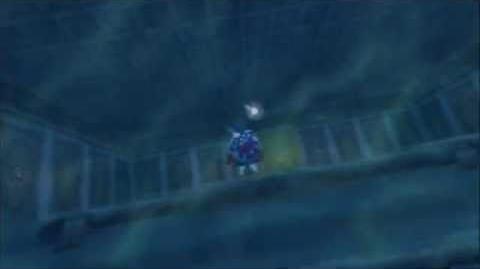