Twilit Aquatic, Morpheel (覚醒多触類 オクタイール, Kakusei Tashokurui Okutaīru?, Awakened Many-feelered Octaeel) is the boss of the Lakebed Temple, the third dungeon in The Legend of Zelda: Twilight Princess. It is a massive eel-like beast with eight watery tentacles surrounding its large mouth and a single eye in its upper back. Morpheel was turned into a savage beast by ingesting or touching the Fused Shadow, suggesting it was more peaceful under other circumstances. The exact species of origin is unknown.

Interestingly, Morpheel is the only boss in Twilight Princess other than Ganon who bleeds when hit.

Upon entering Morpheel's watery chamber, Link must equip his Zora Armor and swim to the bottom of the chamber, where Morpheel's mouth and tentacles are seen sticking out of the sand. A single eyeball is constantly changing position within its tentacles. After equipping the Iron Boots, Link uses his Clawshot to rip the eye out of the gelatinous appendages and strikes it with his sword while Morpheel tries to grab Link with its tentacles and eat him, though it spits him out after chewing on him a few times; if Link is wearing the Iron Boots while being chewed and then spat out, then he will fall back into Morpheel's mouth and be chewed on and spat out again, and the process will repeat until he takes off the boots or dies. It is possible to prevent this by slashing Morpheel's tentacles when they come too close. Morpheel also expels a school of Bomb Fish from its jaws, giving Link a slew of decoy targets for his Clawshot.

After repeating this a few times, Morpheel erupts from the sandy chamber bottom, revealing its full eel-like form, and begins swimming around the room. It will attempt to eat Link by making a whirlpool, sucking Link in if he happens to swim within sufficient reach of its jaws or in front of it. This is the only way it can damage Link during this phase. After removing his Iron Boots, Link must use the Clawshot to grapple onto Morpheel's eye, which is now on the top of its head, and attack it repeatedly. This phase is very similar to the second phase of the battle against Argorok in that Link attacks the two bosses by latching onto their backs with the Clawshot and stabbing their weak spots. Additionally, the same music track plays during these battles.

After a number of blows its eye is destroyed, Morpheel smashes into the chamber's wall, drains the room of water, and dies. It subsequently explodes into particles of twilight and releases the third and final Fused Shadow. Curiously, Morpheel does not seem to attack Link maliciously; rather, it appears to attack him out of instinct. 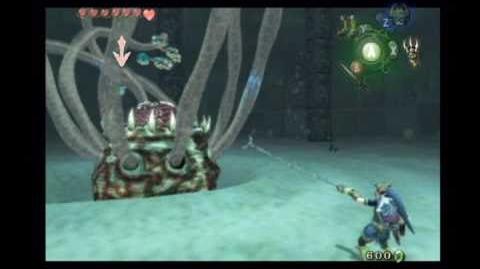 It is possible that Morpheel is a corrupted Bomb Fish that has been infused with the power of the Fused Shadow, perhaps by ingesting it. This theory is supported by the structure of Morpheel's first layer of teeth, which is similar to that of a Bomb Fish, and the fact that it seems to reproduce Bomb Fish during the fight. Others believe that Morpheel may be a mutated Hylian Loach, due to the presence of Hylian Loaches in the temple. It is also possible that it is a desendent or the same species as Morpha from The Legend of Zelda: Ocarina of Time based on how the eye moves through the tentacles like Morpha moves through the water tentacles. The eel appearence could just be an armor created from the power of the Fused Shadow and the eye could be the real Morpheel. It may also be a skull fish corrupted by the Fused Shadow, due to the abundance of them near the boss chamber door.

"Morph" means 'form', and it is also a homage to "Morpha", a similar boss from Ocarina of Time, and 'eel' refers to its appearance.

Retrieved from "https://zelda-archive.fandom.com/wiki/Morpheel?oldid=489750"
Community content is available under CC-BY-SA unless otherwise noted.