"You got Mystery Seeds! What they do is a mystery! Try them on many things! Open your Seed Satchel to use them."
— In-game description

Mystery Seeds are items that appear in both The Legend of Zelda: Oracle of Ages and Oracle of Seasons. These items are stored in the Seed Satchel along with other types of seeds. Mystery Seeds resemble question marks and can be used on Owl Statues to receive hints. When used on most enemies, they produce a random effect similar to that of one of the other four types of seeds. For certain enemies, such as Buzzblobs and Cuccos, Mystery Seeds will cause a mutation to occur, turning them into Cukemans and Baby Cuccos, respectively,in a similar fashion to the Magic Powder.

In Oracle of Ages, Link gathers Mystery Seeds from the Mystery Tree in Deku Forest. Upon finding the Mystery Seeds for the first time, Link will be taken by a guard to Queen Ambi, who has been looking for the Mystery Seeds for Nayru. Ambi takes the seeds and gives Link Bombs in exchange. Link can go back at any time to retrieve more Mystery Seeds from the tree, but it is only found in the past. There is also another tree located in the southeastern part of Rolling Ridge. It only appears in the past as well. However, upon receiving them, Nayru ends up throwing them away in disgust (In actuality, it was Veran, who was possessing Nayru during this time, who found them disgusting). In addition, Link later used the mystery seeds to exorcise Veran from Nayru's body (and later Queen Ambi's body) when fighting her at Ambi's Palace and the Black Tower, respectively.

In Oracle of Seasons, the Mystery Tree can be found southeast of the second dungeon, Snake's Remains, after obtaining the winter-imbued Rod of Seasons and the Shovel. The seeds only grow in the summer season. They play a key role in defeating Frypolar by turning its ice attack into liftable ice chunks that can damage his fire form.

Mystery Seeds appear as a Food item for Companion Fairies and are classified as a plant-based food. Like all food items, there are 3 grades: Bronze, Silver, and Gold.

In the Link's Awakening DLC, Gold grade Mystery Seeds can be obtained from a Pot in the scenario located in the square containing the Bottle Grotto. This can also unlock Mystery Seeds causing them to appear as random foods dropped by enemies. 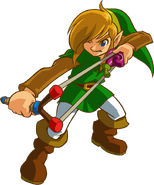