Zeldapedia
Register
Don't have an account?
Sign In
Advertisement
in: Articles with non-canonical information, Gerudo, Sages, The Legend of Zelda: Ocarina of Time characters
English

This article is about the character from Ocarina of Time. For the location from The Adventure of Link and the the Divine Beast in Breath of the Wild, see Town of Nabooru and Vah Naboris.

"First of all, let me introduce myself. I'm Nabooru of the Gerudo. I'm a lone wolf thief. But don't get me wrong! Though we're both thieves, I'm completely different from Ganondorf."
— Nabooru

Nabooru (ナボール, Nabōru?) is a character from The Legend of Zelda: Ocarina of Time. Initially a lone-wolf thief during the child timeline, she later acted as a leader of the Gerudo during the Adult timeline, second only to Ganondorf; however, she openly opposes Ganondorf's sinister intentions. Like most Gerudo, she has red hair, dark skin, and golden eyes.

Nabooru is a mature, red haired, yellow eyed woman. She is decorated all over with Gerudo jewelry. She is dressed very sparsely, with her upper half clothing consisting only of a decorated bra, leaving the rest of her upper half bare and revealing her belly button. Her physical structure is small and scrawny. Her lower half of the body is covered by a pair of large, slack, pink pants. She wears red, pointy shoes to cover her bare feet.

As a child, Link encounters Nabooru inside the main hall of the Spirit Temple, where she is attempting to sneak deeper into the temple; however, due to the small size of the passage to the next area, she is unable to enter. After Link tells her that he has nothing to do, she considers allowing him to help her. She plans to sneak into the temple to steal the legendary treasure of the Gerudo — the Silver Gauntlets, which bestows great strength upon the wearer — in order to make a point to Ganondorf by interfering with his plans. As the Gauntlets may only be worn by an adult, she promises Link "something great" that she does not expand upon, as a reward for assisting her. Link enters the passageway into the temple and manages to find the Silver Gauntlets; immediately afterward, Link sees Nabooru in the distance, encircled by Koume and Kotake, the evil witches who guard the temple. They use their black magic to spirit her away.

With the time-traveling powers of the Master Sword, Link returns to the Spirit Temple as an adult seven years later. He uses the Silver Gauntlets he found as a way to complete Nabooru's plan and make his way deeper into the temple. In an antechamber to the boss room, Link encounters a large Iron Knuckle with different armor and more endurance than those he had encountered before. Upon defeating it, the armor falls off, revealing it to have been Nabooru all along. She claims ignorance as to where she is; immediately afterwards, the witches reappear and use their magic to teleport her away again with the expressed intention of brainwashing her again, as her presence commanded respect among the Gerudo. Link manages to defeat Twinrova in battle, revealing an entrance to the Chamber of Sages in the Light World. In the Chamber of Sages, Nabooru is revealed to be the Sage of Spirit, destined to combat evil. She presents Link with the Spirit Medallion and before Link goes, she remarks that she would have kept the promise she made back then, if she had known he would have turned out to be so handsome as an adult. Later, Nabooru aids Link in creating a pathway to Ganon's Castle and appears before him in the Spirit Temple section of the castle. After the defeat of Ganon, Nabooru and the other sages use their power to seal him away. In a post-credits sequence, Nabooru is seen with the other sages on Death Mountain.

Nabooru makes a cameo appearance in the Master Sword chamber beneath Hyrule Castle as an image on a stained glass window. She is seen adopting the pose she was in when preparing to seal Ganon away in Ocarina of Time. However like the other Seven Sages, Nabooru herself does not physically appear as the stained glass window is just a picture cameo referencing her role in sealing Ganon in Ocarina of Time.

She makes no appearance in The Legend of Zelda: Breath of the Wild, but she is referenced at least twice: Urbosa briefly prays before Nabooru after Vah Naboris is purged of corruption, citing her as a legend among the Gerudo, and also reveals that she acted as her Divine Beast's namesake, and Mount Nabooru appears to be named after her.

It is also suggested Nabooru was positive influence on the Gerudo people as they are no longer thieves, live by specific laws in Gerudo Town, are ruled by a line of female Chieftains, engage in economic trade, and are sworn enemies of Ganon whom Urbosa confirms was one a Gerudo. Additionally they are allies of the Royal Family of Hyrule with Urbosa being a Champion and close friend of Zelda and her late mother implying the Gerudo leaders built good diplomatic relations with the Royal Family of Hyrule possibly inspired by Nabooru's role as the Sage of Spirit. Gerudo are also known to pray to the spirits of deceased loved ones which may be tied to Nabooru being Sage of Spirit and the past role of the Spirit Temple in Gerudo culture.

Nabooru is sent by the Twinrova sisters to make sure Sheik can take Link prisoner. She interrogates Link when he comes to prison. He fights her, and in the process, cracks the gem on her forehead that serves as the Twinrova sisters' means of controlling her. She then fights her comrades, eventually freeing them from the sisters' spell as well, while Link takes Sheik out of harm's way. Nabooru then gave Link the Mirror Shield to defeat the Twinrova sisters. Nabooru later helps Link get into Ganon's Tower once she awakened as the Spirit Sage.

Like most of the Gerudo during her lifetime, Nabooru acts as a thief, although she does have some moral standards. She does not approve of stealing from women and children, as well as the murder of innocent people and claims such behavior goes against Gerudo customs implying Ganondorf has lead the Gerudo astray. Additionally a Gossip Stone quote refers to Nabooru as a "lone wolf thief" implying she worked alone presumably due to holding true to her sense of morality.

Unlike the other Gerudos, Nabooru refuses to accept Ganondorf as her king, being disgusted of his vile nature. Her contempt towards Ganondorf is enough to attempt to steal key artifacts from the Spirit Temple, as an act of rebellion.

While meaning no harm, it is implied that Nabooru has a slightly teasing side, as she frequently refers to Link as "kid". However, it is notable that once Link physically matured in the Adult Timeline, Nabooru compliments his growth, to the point of referring to him by name from then on. She also promised to reward Young Link for helping her acquire the Silver Gauntlets though it is unclear if she was teasing him or not as she was kidnapped by Koume and Kotake. By the time she would have been able to fulfil said promise she had awoken as a sage and both she and Link had more pressing concerns.

Artwork of Nabooru as an Iron Knuckle 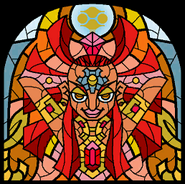