"I'm Navi the fairy! The Great Deku Tree asked me to be your partner from now on! Nice to meet you!"
— Navi

) is a character from The Legend of Zelda: Ocarina of Time. A fairy, Navi serves as Link's fairy companion throughout the game. She is given the task to aid Link by the Great Deku Tree. Although she is initially a little frustrated with this duty and is uncertain if Link is capable of acts of heroism, she soon grows much fonder of him, and they become good friends. At the end of the game, Navi leaves her partner for reasons unknown.

Navi stands as a milestone in the Legend of Zelda series, as she is the first of many side-kick companion characters that would appear in later games in the series. She is also the first character in the canonical entries in the series to have voice acting, speaking words like "hey", "watch out", and "listen" whenever Link comes across anything interesting or dangerous, as well as saying "hello!" to a Kokiri on her way to Link's House, and when she first meets Link. She also occasionally provides Link with the last known objective in the game for the player's convenience. Navi enables Link to Z-Target people, objects and enemies, changing her color to indicate what they are. She can then provide tips, hints, or information about the object or enemy Link is targeting, including their weaknesses. Her voice acting was provided by Kaori Mizuhashi, who would later provide the voice for Ciela, another one of Link's fairy companions from The Legend of Zelda: Phantom Hourglass.

At the beginning of the game, the Great Deku Tree (in the depths of Kokiri Forest) senses a looming power that threatens to destroy Hyrule. He asks Navi, one of his fairy children, to bring a young boy named Link to see him. Unlike the rest of the inhabitants of the forest, Link does not have a guardian fairy companion. Navi arrives in Link's House, and is surprised to see what a small and seemingly lazy child Link is, doubtful that he is capable of handling the tasks the Great Deku Tree will set upon him. Despite this, she tells Link about the Great Deku Tree's summoning, and together, they travel to the grove of the Great Deku Tree. The tree tells the two about a curse placed on him by an outsider, and asks them to travel inside him to break the curse. They do indeed dispel the curse by defeating Queen Gohma; however, the Great Deku Tree reveals that he was fated to die no matter what the outcome of their excursion into his insides would be. He explains that he was cursed by the Gerudo mystic Ganondorf, who had been seeking the Spiritual Stones - magical stones that have the power to open the door to the Sacred Realm, where the omnipotent Triforce can be found. He asks them to stop Ganondorf from achieving this at all costs, and after presenting them with the Kokiri's Emerald, tells them to travel to Hyrule Castle and converse with Princess Zelda, who resides there. The Great Deku Tree in his final words before dying, remarks that the future depends on Link, and entreats Navi to help him carry out his will.

From this point, Navi and Link work together to prevent any disaster that may come upon Hyrule. While initially, Navi seems to have a disdain for Link, they quickly grow fond of each other during their quest. After many ordeals, Link and Navi confront Ganondorf at the very top of Ganon's Castle. Navi is unable to aid Link in the ensuing battle due to the dark energy Ganondorf sends forth, leaving Link unable to Z-target or find out his weaknesses. Despite this, Link defeats Ganondorf, who uses his final strength to try and bring the castle down, with the three of them still inside. Link and Zelda narrowly escape, and the tower collapses in on itself. As they celebrate their victory, they hear a slight rumble from the direction of the ruins. Link surveys the scene, and Ganondorf rises from the rubble, utilizing the true power of the Triforce of Power to transform into a monstrous, pig-like beast. Navi promises Link that she will not be held back by Ganondorf again, and together, they defeat the beast and seal it away. With Ganondorf defeated and peace restored, Link and Navi are sent to the Child Timeline by Zelda so they can regain their lost time. At the Temple of Time, Navi bids farewell to Link before soaring towards the lit window and disappearing. The reason for her departure is never ascertained.

According to Hyrule Historia, the Nintendo Power strategy guide, and the official Legend of Zelda series website, Navi is the one that Link is searching for at the beginning of Majora's Mask, the direct sequel to Ocarina of Time. However, this is never directly stated in-game.

In the opening cutscene of Majora's Mask, it is stated that Link went on a journey to find a "beloved and invaluable friend" with whom he "parted ways when he finally fulfilled his heroic destiny". Navi's familiar chiming sound can be heard directly after this section of the cutscene, which indicates almost explicitly that the "beloved and invaluable friend" is referring to Navi.

Also, while not considered to be canon, it is made clear from the beginning of the Majora's Mask manga that Link is searching for Navi, even briefly mistaking Tatl for her. 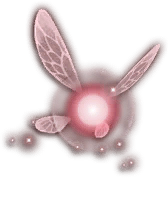 Navi makes a brief appearance in Hyrule Warriors in the Ocarina of Time Era. As Sheik and Impa are searching for the Gate of Souls, Navi approaches them and asks them to save Princess Ruto from Darunia and the Gorons. Navi also claims that Darunia had lost his senses after having apparently met Zelda.

Link and the Portal of Doom

Navi is Link's companion once again in this book taking place during the events of Ocarina of Time.

In The Legend of Zelda: Breath of the Wild, the Nabi Lake, and its South and West sides, are named after Navi.

Though never directly stated in-game, Shigeru Miyamoto revealed in an interview conducted by Famimaga 64 that Navi is jealous of Princess Zelda and has feelings for Link.[1] However, it should be noted that this interview was given while the game was still in development, and makes reference to other things that are not accurate for the final version of the game, making it possible that Navi's interest in Link was also changed.

Though non-canonical, as Navi departs in the Temple of Time in the Ocarina of Time manga adaptation, she cries out "Link... I love you!", lending further credence to the theory that Navi has romantic feelings for Link.

There are many theories as to why Navi would so abruptly leave Link without any apparent explanation. One is that owing to the fact that Link is not a Kokiri, and thus was never meant to have a fairy companion in the first place, Navi had to depart once his quest had been fulfilled.

Another theory is that Navi realized that she and Link could not ever truly be together as romantic partners, and decides to leave him to escape the unavoidable rejection.

The location to which Navi departs is debated by many, but it should be noted that the same general location that Navi was seen departing in Ocarina of Time corresponds to a secret entrance to the Temple of Time found in The Legend of Zelda: Twilight Princess. It is possible that she departed through this entrance either to settle there in solitude, or move on to parts still unknown.

It is possible that the Navi Trackers mini-game is named after Navi herself. To a further extent, it could reference Link's search for her following Ocarina of Time. Alternatively, it could be an abbreviation of "Navigator".

A fairy that appears during one of Link's taunt animations, where it comes out and flies around him, physically resembles Navi. Additionally, in the Subspace Emissary mode, during Link's introduction, a blue fairy similar to Navi is shown fluttering around him before he obtains the Master Sword. It flies away when the Halberd appears and starts dropping Shadow Bugs. It is possible that this fairy is Navi, though it may be simply a generic fairy companion.

In an interview, Toru Osawa was quoted as naming Link's Fairy companion ナビィ (nabyi, ナビィ?), based on the Japanese verb "to navigate" (ナビる, nabiru?), as her role was to help the player navigate. Her English name, Navi, is similarly based on the English word "navigate".