This article is about the boss. For the character, see Nightmare.

"We were born of nightmares... To take over this world, we made the Wind Fish sleep endlessly! If the Wind Fish doesn't wake up, this island will never disappear! We would have been the masters of this place...But you had to come here and disrupt our plans! Heh heh! You can never defeat us!!! Let's rumble!"
— The Nightmare

Nightmare, often known collectively as DethI (デスアイ, Desu Ai?, Death Eye, pronounced as "Death I") and also known as Shadow Nightmares, is the last of the Nightmares and final boss in The Legend of Zelda: Link's Awakening. It is hidden inside the Wind Fish's Egg. To reach Nightmare, Link must enter the Egg after collecting each of the eight Instruments of the Sirens from the dungeons of Koholint Island.

Nightmare is fought in six forms, each one appearing as soon as Link defeats the previous one. The six forms are as followed:

Giant Bot is a giant blob that hops around the room. As its name implies, it resembles a Giant Bot from Zelda II: The Adventure of Link. To defeat this form, Link must sprinkle Magic Powder on it multiple times.

Nightmare's Agahnim form is not the real villain from The Legend of Zelda: A Link to the Past, but merely a façade resembling the evil wizard. Unlike the original Agahnim, this nightmare form has oddly jointed fingers and huge white eyes. To defeat this boss, Link must hit his energy balls back at him, much like the real Agahnim.

Moldorm is similar in behavior and appearance to the Moldorm from Tail Cave. Link attacks it the same way, by hitting it in the tail, but in this fight, he must hit it more times and faster. As characteristic of all forms of Nightmare, Moldorm has two huge white eyes. Despite the fact that there is another Moldorm in the game, this Moldorm more closely resembles the attack pattern of the Moldorm in A Link to the Past.

As with Agahnim from A Link to the Past, this is not the real Ganon, but Nightmare made it to look similar to him. He is depicted as a creature twirling an axe-like trident above his head while flaming bats are conjured up to fly at Link. Ganon then attacks by throwing his double-sided axe. The easiest way to defeat him is to charge at him with the Pegasus Boots and sword, but the Spin Attack works as well. The fight is similar to the Ganon fight from A Link to the Past.

Lanmola is a fast moving blob that bumps into Link to attack him. Despite being called a Lanmola, it behaves very differently from the real enemy. To defeat Lanmola, Link needs only hit it once with the Boomerang, Hookshot, or Magic Rod, or even a properly-timed Spin Attack.

DethI is the final form of Nightmare and the final boss in Link's Awakening. It is considered the Nightmare's "true" form. Fans have noted that Dethl may have inspired the design of Vaati, the main villain in The Legend of Zelda: Four Swords, Four Swords Adventures and The Minish Cap.

Once Nightmare transforms into its true form, DethI, equip the Roc's Feather and the Bow. Stay in front of its eye at all times, however, and be careful not to ram into it as it will damage Link. Dodge its spiky arms with the Roc's Feather and once it opens its eye, shoot at it with the bow until it closes its eye again. DethI will move faster and faster the more damage will be done to it, so pay attention to the arms. After it takes about twenty hits, it will die. Link can also beat it with a single well-aimed hit with the Boomerang. 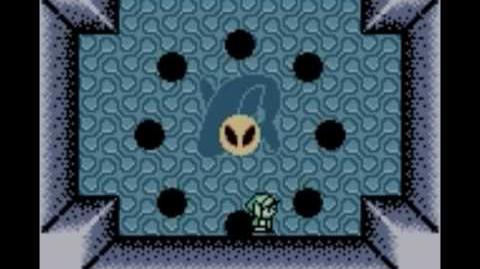 Retrieved from "https://zelda-archive.fandom.com/wiki/Nightmare_(boss)?oldid=543148"
Community content is available under CC-BY-SA unless otherwise noted.