The Nintendo 3DS is a portable video game console developed and manufactured by Nintendo. It is the fifth handheld console from Nintendo, and the successor to the Nintendo DS series of handheld consoles. It features a clamshell design similar to the DS line, with two LCD screens, the bottom screen being a touch-sensitive screen, and the top one being a 3D-compatible widescreen. The 3DS has the ability to produce 3D stereoscopic effects without the use of special glasses, via a process known as auto-stereoscopy. To control the 3D effect, the Nintendo 3DS features a 3D Depth Slider, which allows the 3D effect to be scaled back or completely turned off. Similar to the Wii, the 3DS features a Home button used to bring up system functions.

At launch, the 3DS was released in two colors, Aqua Blue and Cosmo Black, with a slew of other color options being released gradually. Notably, a version of the 3DS bundled with The Legend of Zelda: Ocarina of Time 3D commemorating the 25th Anniversary of the Legend of Zelda series was released. This 3DS incorporates elements from the series such as the Triforce, the Ocarina of Time, and the Goddess's Harp, as symbols in its design.

A year after release, the Nintendo 3DS XL was announced on the 21st of June with the release date set in the late summer. Much like the Nintendo DSi XL, the 3DS XL features longer battery life and screens which are 90% larger than the original. This version is not set to replace the 3DS and both are still being manufactured. The 3DS XL was initially released in matte color in the combination of red and black, and blue and black. On the 11th of October 2014, the New Nintendo 3DS and New Nintendo 3DS XL were released in Japan, with European and American releases following in 2015. The regular New Nintendo 3DS features interchangeable faceplates and colored buttons, while both it and the XL feature two new buttons (ZL and ZR), Super-Stable 3D (It uses Face Tracking technology to keep the 3D in effect even if the user moves their head or the 3DS around), and a C-Stick. It also includes built-in amiibo functionality. The recently announced New Nintendo 2DS XL has been released in stores on July 28, 2017. It has all the features of the New Nintendo 3DS XL, except the stereoscopic 3D function.

The 3DS offers full backwards compatibility for Nintendo DS games, as well as downloadable content purchased for the DSi or DSi XL. The Nintendo 3DS also features older features such as a built-in microphone and supports Wi-Fi standards, allowing players to interact with each other within short range or online. The 3DS can communicate with other 3DS devices when in close proximity with each other by using StreetPass or over the Internet using SpotPass, similar to the Wii's WiiConnect24 service. The 3DS can use StreetPass and SpotPass when in sleep mode.

The Nintendo eShop features a Virtual Console service, allowing players to purchase and download Game Boy and Game Boy Color games which have been modified to utilize the 3DS's 3D stereoscopic capabilities, as well as DSiWare games and games specifically made for the Nintendo 3DS. The eShop also features game information, ratings, and demos, similar to the Wii's Nintendo Channel and the Wii U's eShop. The 3DS also has a built-in pedometer feature which can be used to earn Play Coins, virtual currency used for various purposes in certain titles, based on how much the user walks.

Other new features include an analog joystick called the "Circle Pad," a telescoping stylus, three cameras (two in the front for taking 3D pictures), a motion sensor, a gyro sensor, and a charging cradle terminal. The system was initially shown in many different colors, including red, blue, and black.

Zelda games released on the 3DS 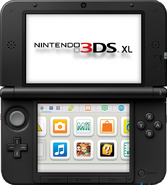 The Nintendo 3DS XL
Add a photo to this gallery
Retrieved from "https://zelda-archive.fandom.com/wiki/Nintendo_3DS?oldid=533609"
Community content is available under CC-BY-SA unless otherwise noted.