Zeldapedia
Register
Don't have an account?
Sign In
Advertisement
in: The Legend of Zelda: Oracle of Ages locations

The Nuun Highlands is a location from The Legend of Zelda: Oracle of Ages. It is found in present day Labrynna, where Ambi's Palace once lay. It is located in northern Labrynna, with Symmetry City to the west, Lynna City to the south, and Rolling Ridge to the east. The terrain can be one of three options, depending on which animal companion Link meets later on.

After meeting Mutoh, the boss of the Carpenters, he requests that Link find his three workers so they can complete the bridge to Symmetry City. As the boss points out, however, Link will not be able to navigate the rough terrain on his own.

The Mask Shop, where the Happy Mask Salesman resides, is found on the southwestern outskirts of Nuun Highlands.

The terrain of the Nuun Highland area will be configured to suit the abilities of the particular animal companion that Link will be paired with.

If he meets Ricky, the terrain will adapt a prairie-style with high cliffs, ledges and vegetation. Due to the nature of the terrain, it is impossible to explore most of it without Ricky.

If Link meets Dimitri, the terrain will adapt a river-style with waterfalls and strong currents. Link will not be able to navigate the swift currents without Dimitri, even with the help of the Zora's Flippers or the Mermaid Suit. If Link tries to swim in the currents, he will be unable to swim against them and will be taken wherever they lead him.

If Link meets Moosh, the terrain will adapt a wasteland-style with rifts and deep gorges. It is impossible to explore most of the hazardous terrain without Moosh, even with the help of the Roc's Feather. 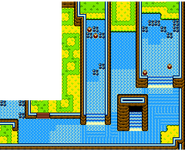 The Nuun Highlands, as they appear with Dimitri as Link's partner 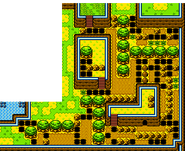 The Nuun Highlands, as they appear with Moosh as Link's partner
Community content is available under CC-BY-SA unless otherwise noted.
Advertisement