Octogon (オクタゴン, Okutagon?) is the boss of the Mermaid's Cave, the sixth dungeon in The Legend of Zelda: Oracle of Ages. Octogon is encountered in the Mermaid's Cave of the past. Once he is defeated, Link obtains the Bereft Peak, one of the Essences of Time.

Octogon will continuously circle the middle platform of its room, always making sure that its shell is facing the center, thereby keeping its vulnerable face out of harm's way. It will only occasionally turn around to spit a large rock at Link. At this time, Link can hit it with his sword. It is, however, possible to hit Octogon with a reflected seed from the Seed Shooter even while it is turned away.

After a few hits or at random intervals, Octogon changes strategy. It will submerge itself underwater so that only its shell remains above the surface. At this time, it can expel fireballs at Link if he remains on the platform. In order to continue the battle, Link is required to dive to the bottom of the pool with his newly acquired Mermaid Suit. While underwater, Octogon assumes that it is at advantage and will actively hunt Link, often attempting to trap him in a large bubble. However, this new strategy makes it easier for Link to hit it with his sword. After yet a few hits, Octogon will resurface and the battle repeats itself. 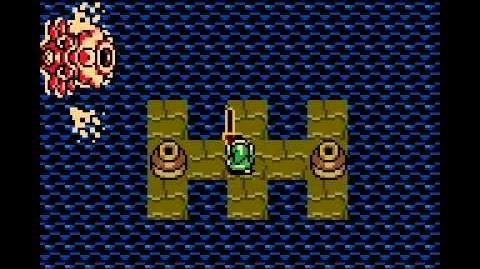 "Octogon" is a play on octagon, an eight-sided polygon. The "octo" prefix is a reference to its physical appearance, slightly resembling a hybrid of octopus and Octorok.

Retrieved from "https://zelda-archive.fandom.com/wiki/Octogon?oldid=447015"
Community content is available under CC-BY-SA unless otherwise noted.