Slice his sword
Call on spiders

"I was trying to find out about the poison in the swamp, so I went to Woodfall Temple above the waterfall. But the temple had become a monster's lair, and the princess was captured by the monster..."
— Imprisoned Monkey

Odolwa is a giant green-skinned humanoid, standing about ten feet tall and wielding a sword nearly as long, as well as a diamond-shaped shield. He wears only a red loincloth, red shoes, and a wooden mask with a snarling face and glowing red eyes behind its sockets. His body is adorned with multiple red and blue tattoos.

While traversing Woodfall Temple, Link encounters Odolwa. After he is defeated, the water of Woodfall is cleansed of the poison, and Link retrieves Odolwa's Remains; shortly thereafter, Link is transported to a dream-like dimension, where one of the Four Giants, now free as a result of Odolwa's death, teaches Link the "Oath to Order" in order for him to call the giants in a time of utmost need. After this, Link is transported to a small room located at the back of the temple, where the Deku Princess is imprisoned. She can be returned to the Deku King in order to fully restore peace and order to Woodfall.

Interestingly, what seems to be Odolwa's Remains appears on the side of the Festival Tower in Anju's Grandmother's story about the Carnival of Time.

"If you get close to him, you'll be beaten! Do you understand me?"
— Tatl 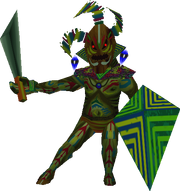 Odolwa attacks with various sword strikes, including a continuous spin attack. He will also occasionally leap upward out of sight and come back down elsewhere. If Odolwa is not currently attacking, then he will block any of Link's attacks, except for bombs, which he will instead leap away from. However, Link can stun Odolwa by shooting him with arrows immediately after Odolwa has launched an unsuccessful attack or if he is dancing; in this state, he can be damaged with swords or other weapons for a short time. Another way Link can stun Odolwa is to shoot bubbles at him in his Deku form. Link can also use Bomb Flowers found in the boss room to stun and/or damage him. He also continuously yells 'Yee, haah, hoy', which can get disturbing in the battle. If he stops yelling that phrase, he usually attacks or starts dancing.

After the battle has gone on for a short time, Odolwa will begin to use other tactics in addition to attacking with his long sword. He will sometimes stand and chant at this point, leaving him more open to attack. He can summon Moths and large bugs to attack Link. The bright lit fuse of an explosive weapon (such as a bomb, a Bombchu, or a Powder Keg), will draw Odolwa's minions to it, and will likely destroy them in the resulting explosion. Sometimes, Odolwa creates a circular fire wall around Link that can be harmlessly passed through if Link rolls through it as a Goron, and will also burn enemies that walk into it.

After Odolwa has begun summoning insects, rocks will also occasionally fall from the ceiling onto Link. There is also a Deku Flower in the center of the room. One of the fastest ways Link can defeat Odolwa is to shoot him with an arrow, approach him while stunned, and spin attack repeatedly. Alternatively, after Link obtains the Fierce Deity's Mask, he can use it to transform and defeat Odolwa with relative ease, especially as the Fierce Deity's Sword Beams can harm Odolwa even when his shield is up.

In the 3DS remake, Odolwa acts identically to the original, but his weakspot is now eye on the back of his head that Link can only hit after Odolwa is stunned. 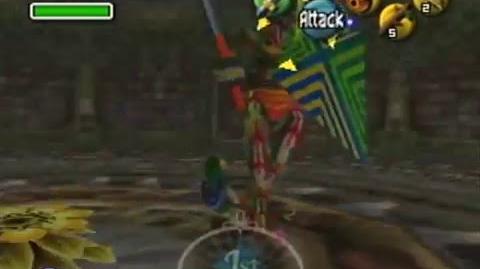 Odolwa is the god of Woodfall and the Deku King must send regular tributes in his honor. During the events of the story, the Deku Scrubs of the Southern Swamp forget to pay tribute; in retribution, Odolwa kidnaps the princess as a sacrifice. When Link is trying to save the imprisoned monkey, Odolwa breaks into the Deku King's palace to punish him for not giving any sacrifices. Link easily defeats him, however. Unlike in the game, Odolwa actually speaks.