"Ever since the boss went funny in the head, there've been scary monsters everywhere."
— Female Monkey

Ook, also known as the Boss Monkey, is the mini-boss of the Forest Temple, the first dungeon in The Legend of Zelda: Twilight Princess. He is a Baboon and leader of the Monkeys of Faron Woods. While possessed, he often slaps his buttocks - his one weakness during the battle - at Link as a way of taunting him.

While Faron Province was covered in twilight, a Shadow Insect affixed itself to Ook's head, corrupting his soul and giving him dark powers. Ook acquired the magical Gale Boomerang, and is presumably responsible for it being corrupted by dark magic, and retreated to the Forest Temple, leaving the other Faron monkeys in fear of their leader and the entire forest.

Link eventually dispels the twilight from Faron Province and enters the Forest Temple. Inside, Ook uses the Gale Boomerang to destroy the bridge leading to his chamber, thus preventing Link from crossing a deadly chasm. Link rescues the other monkeys from captivity inside the Forest Temple, and they help him cross the chasm. Link challenges and defeats Ook, destroying the Shadow Insect and freeing Ook from the curse. Ook leaves the battle area in pain and confusion and leaves behind the Gale Boomerang, which is also freed of its curse. Link retrieves it and uses it to proceed through the dungeon.

Later, Ook makes his final appearance supplying Link with Bomblings to aid him in defeating the dungeon boss, Diababa.

Ook's chamber contains several wooden pillars arranged in a circle, plus one in the center. During the battle, he leaps from one pillar to another, never assaulting Link directly but rather using the Gale Boomerang to attack Link and to dislodge Baba Serpents from the ceiling. The only way for Link to attack is by rolling into the pillar on which Ook is standing, knocking him off balance. If Ook has thrown the Gale Boomerang before being stunned, he will be unable to catch it when it returns and will be knocked to the ground, while the boomerang falls onto the pillar. Once Ook falls, Link can land several blows with his sword on his bottom before the baboon climbs back onto a pillar and retrieves the Gale Boomerang. After Ook takes enough damage, the Shadow Insect dislodges from his head and is destroyed, leaving a very shamefaced Ook, who now realizes what he had done. After noticing Link, he flees the chamber, leaving the Gale Boomerang, which has been returned to normal.

Ook is one of the few enemies in the game, along with Dangoro, Fyrus, Blizzeta, and King Bulblin not to explode when defeated. All these enemies also become friendly towards Link after their defeat, but Ook is the only one to help Link with a boss fight. 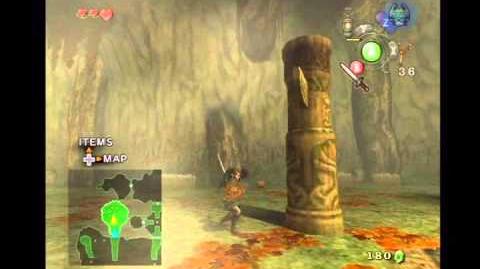 'Ook' is onomatopoeia for the cry of a monkey.