Zeldapedia
Register
Don't have an account?
Sign In
Advertisement
in: Swords, The Legend of Zelda: Twilight Princess items
English

"This is a sword crafted by Rusl, the best swordsman in Ordon, as a tribute to the royal family."
— In-game description

The Ordon Sword is a sword from The Legend of Zelda: Twilight Princess. The second sword obtained in the game, the Ordon Sword was forged by Rusl as a gift to the Royal Family of Hyrule together with the Ordon Shield. The steel from which the Ordon Sword is forged is inlaid with horns from Ordon Goats. It is the only sword at Link's disposal until he obtains the superior Master Sword; the Ordon Sword can still be used after this if Link selects it in the Item Subscreen. Interestingly, the only phase of the Ganondorf battle in which he can be damaged by the Ordon Sword is the battle's third phase.

Near the beginning of the game, Link is given the task of bringing the Ordon Sword and Shield to Hyrule Castle as a tribute, but these plans are halted by Zant's invasion of Hyrule. When Link is turned into a wolf by the Twilight, Midna comes to his aid. In order for her to help him save the captured children of Ordon Village, she tells Link to get a sword and a shield, and so he sneaks into the village and steals the Ordon Sword from Rusl's house. After entering the Twilight covering Faron Woods, Midna holds the Ordon Sword in her hands while wearing the shield on her face like a Mask. She recklessly tries to wield the sword with the shield on her face, while on Link's back, though Wolf Link's reflexes allow him to avoid injury, though he angrily glares at Midna for her recklessness.

Midna decides that neither the sword or shield are suitable for her to wield, but stores them away magically until Link regains his true form. After regaining his true form, Link uses the sword as his main weapon until he obtains the Master Sword, however he is able to switch back to it at anytime.

Rusl has his own Ordon Sword which he uses to defend Ordon Village during the Bulblin attack and when confronting Wolf Link when he appears in the village. Though Colin has no desire to learn swordsmanship at the beginning of the game, at the end of the game he is seen carrying an Ordon Sword, indicating that his experiences in Kakariko Village has caused him to change his views on swords and has presumably started studying swordsmanship under his father (and/or Link).

Render of the Ordon Sword in its Scabbard from Twilight Princess 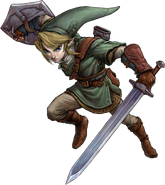