Upgrade of the Master Sword

"Some call our realm a world of shadows, but that makes it sound unpleasant... The twilight there holds a serene beauty... You have seen it yourself as the sun sets on this world. Bathed in that light, all people were pure and gentle... But things changed once that foul power pervaded the world..."
— Midna

The Palace of Twilight (影の宮殿, Kage no Kyūden?, Palace of Shadow) is the eighth dungeon in The Legend of Zelda: Twilight Princess. After finding all four shards of the Mirror of Twilight, the way to the Twilight Realm opens in the Mirror Chamber atop Arbiter's Grounds. After entering the portal, Link faces many trials and battles and makes his way to Zant's chamber, where he battles Zant himself.

The Palace of Twilight consists of a main plaza with paths to three buildings side by side. As two paths are blocked, Link first enters the left building (right in the Wii version), where he has to battle the mini-boss, Phantom Zant, to obtain a Sol. Collecting the Sol and bringing it to the main plaza opens the path to the right building, where Link collects another Sol after defeating Phantom Zant again. In each building guarding the Sols is a black hand, which will chase Link out when he takes the Sol. If the hand takes it, Link can still use the Clawshot to get the Sol back, but if the hand goes back in the door, Link has to go back and try again. The hand will stop chasing Link once he gets out of the palace. When both Sols are placed at the plaza, Link's Master Sword becomes infused with light, allowing it to bypass Shadow Crystal Fog, which lets him continue to the middle building. At the end of this building he faces the boss, Zant, in his throne room.

The Palace of Twilight is a playable stage. In the main story, Lana, Midna and Agitha enter the grounds to close the Gate of Souls inside the palace. However, the Usurper King Zant guards the Gate and commands an army of monsters to defend it. Although the heroes have to overcome the Twilit Dragon Argorok, they manage to subdue Zant and close the Gate.

The Palace of Twilight returns as a playable stage. In addition to its role in the main story it also appears as the stage in Linkle's Tale: Her True Self under the control of Dark Twili Midna's Forces.

It is possible that the Palace of Twilight is technologically advanced, and that Zant Masks and Zant's Hands are robotic. Furthermore, Phantom Zant appears to be a hologram; however, because Link can harm him, this is unlikely. It should be noted that all of this could have been achieved using Zant's magic. Upon her and Link's arrival in the Twilight Realm, Midna mentions that Zant had changed the Palace, meaning that the palace seen during the events of the game is most likely not what the Palace of Twilight ordinarily looks like.

When Midna is shown fleeing the palace following her overthrow and transformation by Zant, the building is glimpsed in the background. It appears virtually the same as it does during actual gameplay with the exception of the absence of the 'waterfalls' of Shadow Crystal Fog adorning the walls. 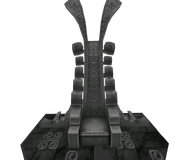 Render of the model for Zant's Throne from Hyrule Warriors

Render of the palace's Throne Room from Hyrule Warriors
Español
Community content is available under CC-BY-SA unless otherwise noted.
Advertisement