Zeldapedia
Register
Don't have an account?
Sign In
Advertisement
in: The Legend of Zelda: Skyward Sword races
English

Resemblance to jellyfish and seahorses

"This is a Parella, an aquatic race. They typically move in groups. They serve the Water Dragon, Faron."
— Fi

The Parella are a race from The Legend of Zelda: Skyward Sword. Resembling jellyfish and seahorses, Parella are creatures that reside in Lake Floria, where they live under the protection of the Water Dragon, Faron. Being invertebrates, Parella can merely squeeze through tight spaces such as planks blocking the underground waterways. They initially show some distrust and fear towards humans, but come to accept Link's presence. One red Parella, Jellyf, guides Link through the underground lake to where Faron resides.

Interestingly, an unnamed Parella will briefly mutter the Secret Moblin's famous quote, "IT'S A SECRET TO EVERYBODY".

The Parella evolved into the Zora sometime after the events of Skyward Sword. Additionally, concept art from the Hyrule Historia implies that the Parella's design was based off of the Zoras and officials at Nintendo have said Zoras were originally going to be put into the game, but the art directors were told to make them more prehistoric looking thus the Parella were created.

It is possible that the name "Parella" originates from the word "umbrella", or a portmanteau of "umbrella" and "parasol", as the flared part of their bodies resembles both. Another possibility is that the name is meant to recall the Spanish word "paella": a popular Valencian yellow rice dish often featuring assorted seafood. 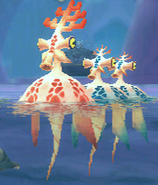 A group of Parella
Español Português do Brasil
Community content is available under CC-BY-SA unless otherwise noted.
Advertisement