"What a worthless creature that ghost was! I will banish it to the gap between dimensions"
— Ganondorf

The Evil Spirit from Beyond: Phantom Ganon (異次元悪霊ファントムガノン, Ijigen Akuryo Fantomu Ganon?, Evil Spirit of Another Dimension: Phantom Ganon) is the boss of the Forest Temple, the first dungeon in the adult portion of The Legend of Zelda: Ocarina of Time, and the fourth dungeon overall. Created by Ganondorf to hold Saria captive, he is depicted as being nearly identical to Ganondorf, with the only exception being his skull-like face.

When Link enters the boss chamber in the Forest Temple, he must climb a set of stairs. When he reaches the top, he finds himself in a circular room. Identical paintings of a dirt trail leading through a dark forest with a castle in the background adorn the walls of the chamber, and all is quiet. It is not until Link attempts to walk back down the stairs that Phantom Ganon appears. Once the stairs are approached, a metal fence jolts out of the ground, impeding Link's path.

Suddenly Phantom Ganon, atop his horse, appears in the center of the room. He gallops into one of the paintings, and the battle begins.

Phantom Ganon's fighting style consists of the use of a lance, in conjunction with magic attacks and a replica of his master's steed. He starts off by riding from within a painting towards Link, confusing him by appearing in two paintings at once. However, the darker image will turn back from the surface of the painting at the last moment, indicating that the other is the true Phantom, and Link must shoot him with his Fairy Bow, or Hookshot as he rides out. If he is not hit, he will fire a lightning blast at the center of the battlefield that explodes after touching ground, sending an energy surge through the ground in multiple directions. If Link is hit, this attack will deplete two of his hearts.

After suffering enough damage, Phantom Ganon's horse will be sent back into the painting without its owner, and Phantom Ganon will resort to hovering over the battlefield, using his staff to fire magical energy bolts at Link. Link must deflect these without being hit himself in a game of Dead Man's Volley. If he is hit, he will lose one heart. Once Link successfully hits Phantom Ganon with the energy ball, he can then move in and attack with his sword until Phantom Ganon gets back up. Alternately, when Phantom Ganon is stunned, Link can shoot him with the Fairy Bow to ensure that he deals maximum damage during the short period of time when Phantom Ganon is weakened. Nearing the end, Phantom Ganon will also mount his staff and charge at Link, hoping to impale him. This particular attack is very powerful and will instantly defeat anyone attempting to complete the game without obtaining any extra Heart Containers since it deals three hearts of damage. Luckily, the attack can easily be dodged.

Once Link slashes Phantom Ganon roughly a dozen times with the Master Sword, the boss flails and dangles in the air while slowly disintegrating in blue fire, and the real Ganondorf's voice is heard echoing throughout the hall, taunting him by saying that the real King of Evil will not be as easily vanquished; he then expresses his anger and disgust at the failure of his creation and banishes the writhing phantom to the Gap Between Dimensions. 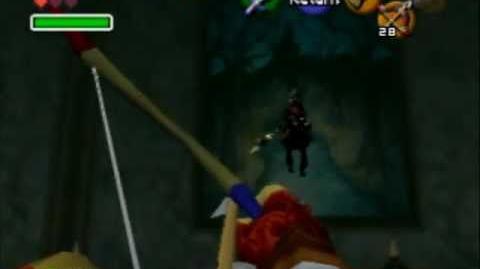