After withdrawing the Master Sword from its pedestal, Link travels back to the Forsaken Fortress to confront Ganondorf. Upon arrival, however, his path is blocked by Phantom Ganon. After a battle of Dead Man's Volley, Link defeats him and a Treasure Chest containing the Skull Hammer appears.

Later, after restoring the Triforce of Courage, Link traverses to the submerged Ganon's Tower, where he is again confronted by Phantom Ganon. This time, however, Link must fight him several times in a large maze with many doors. After each defeat, Phantom Ganon drops his sword. By going through the door that the hilt of the sword points at, Link is eventually rewarded with the Light Arrows. After traveling to the next room, Link is confronted a final time and defeats him solely with the use of his new Light Arrows.

The first battle consists of a game of Dead Man's Volley. His energy balls can be deflected onto him with the Master Sword, and curiously, an empty bottle. After dealing enough damage, Phantom Ganon is destroyed, leaving behind the Treasure Chest containing the Skull Hammer. His path no longer being blocked, Link is able to explore the rest of the Forsaken Fortress.

It is possible to defeat Phantom Ganon much faster by stunning him with the Boomerang just as he lands on the ground. This should be followed up be several Jump Attacks. 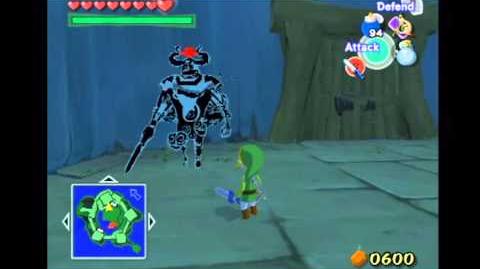 In the second duel in the Illusionary Room, it is revealed that Phantom Ganon will regenerate every time after being bested. In this duel, Phantom Ganon's fighting style is very reminiscent of that of Ganondorf from Ocarina of Time. He also has the ability to replicate himself, surround Link, and swing five swords at him. The real one always appears behind Link. Though each one only takes one sword strike to defeat, Link must defeat Phantom Ganon many times before ultimately defeating him with the Light Arrow; the last Phantom Ganon cannot be defeated by any other means. Link then takes the beast's sword and uses it to smash open the door to the next room. 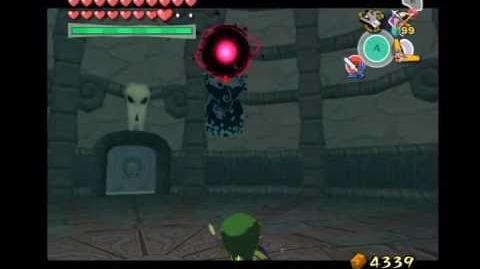 Phantom Ganon appears as a giant boss in Hyrule Warriors Legends and serves as the main antagonist in the new Wind Waker storyline that takes place after the main storyline. In Legends he is depicted as far larger than he was in the Era of the Great Sea and is similar in size to other giant bosses.

After Ganon's defeat, Phantom Ganon from Era of the Great Sea in an alternate timeline manages to steal the Triforce of Power from Lana and seals Cia soul in the Temple of Souls to create a shadowy doppelgänger of her known as Dark Cia. Using the Triforce of Power, he manages to create another rift in time and space, this time to the Era of the Great Sea. Link is sent to investigate and teams up with Lana, Tetra, Daphnes Nohansen Hyrule, and even a redeemed Cia. Dark Cia is eventually destroyed and the group confronts Phantom Ganon in a merged version of the Earth and Wind Temples. In the ensuing battle, the group combined their strengths to weaken the Evil Spirit from Beyond, and destroy him, closing the rift he had create. With the rift closed, Lana and the redeemed decide to split the Triforce of Power between themselves and return to the Valley of Seers to take over their former self's role as the Guardians of Time.

Unlike his depiction in The Wind Waker, he can wield dual swords similar to his master Ganondorf's Great Swords fighting style. However he starts off wielding a single sword and fights in a manner similar to The Wind Waker and can even be put into a downed state via the Dead Man's Volley technique. Eventually once he has taken enough damage he will pull out a second sword and starts using a couple new attacks such as a dual-sword version of the Spin Attack.

Ganondorf also has a Phantom Ganon Recolor that appears under the name Standard Armor (Great Sea) which can be unlocked on the new Great Sea Adventure map.

Interestingly, Phantom Ganon's goals in the story are never clearly explained, though given his relationship with Ganondorf, it is likely he may have intended on using the Triforce of Power and Dark Cia to free his master, but was defeated before he could do so. It is also possible that Ganondorf's sealed Spirit Fragments were influencing Phantom Ganon actions as they had previously done with Cia. Another possibly is that Phantom Ganon was simply seeking to acquire more power for himself and his actions had nothing to do with Ganondorf (as Phantom Ganon being from a different timeline would likely have no loyalty to the Ganondorf from Hyrule Warriors Legends as they originated from different timelines).

Hylian Language is seen on his sword. If translated it says "Zubora and Gabora", the smithies from The Legend of Zelda: Majora's Mask. It is possible that Phantom Ganon was a beast from Termina, where he stole the sword from the smithies and fled to Hyrule. It could have been caught breaking Hyrulean law and was banished to the same place that Ganondorf was imprisoned. Ganondorf could have then adopted the monster and named it "Phantom Ganon" after himself.

Alternately, Ganondorf may have freed Phantom Ganon from the Gap Between Dimensions and transformed him into the Phantom Ganon seen in The Wind Waker. Another possibility is that Ganondorf simply created another Phantom Ganon to replaced the one he banished in Ocarina of Time.

Retrieved from "https://zelda-archive.fandom.com/wiki/Phantom_Ganon_(The_Wind_Waker)?oldid=541345"
Community content is available under CC-BY-SA unless otherwise noted.