"You got the sacred Phantom Sword! This mighty sword has the power to defeat Bellum!"
— In-game description

The Phantom Sword is a sword from The Legend of Zelda: Phantom Hourglass. It is the second and strongest sword Link obtains in the game. Like Oshus's Sword it can be powered up by equipping Leaf to make it deal more damage or by equipping Ciela to make it shoot Sword Beams. A single blow from behind can destroy the previously indestructible Phantoms. Later in the game Link also obtains the ability to utilize Phantom Spheres that stop time using the Phantom Sword and Ciela's powers. Like the Picori Blade, it bears an uncanny resemblance to the Master Sword.

In order to defeat Phantoms, Link is instructed by Oshus to visit the smith Zauz on Zauz's Island. There Zauz informs Link that the Phantom Sword is the only thing that can slay Bellum but in order to obtain the Phantom Sword Zauz must make a new one using three Pure Metals; Aquanine, Azurine, and Crimsonine. After Link obtains these three metals from Goron Island, the Isle of Frost and the Isle of Ruins he returns to Zauz who succeeds in forging the blade of the Phantom Sword. Link then brings the blade to Oshus who fuses it to the Phantom Hourglass, completing the sword. Using the sword Link defeats Bellum and restores peace to the World of the Ocean King.

Zauz also hints that he has or had another Phantom Sword in his possession long ago, but what became of it is unknown. He also states that the Phantom Sword is the strongest of a line of weapons made to fight evil, hinting that there may be a large variety of weapons to fight Bellum, as well as the possibility that many Phantom Swords existed at some point.

Toon Link wields the Phantom Sword as his Level 2 weapon in his Light Sword moveset. 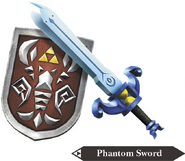 Promotional Render of the Phantom Sword from Hyrule Warriors Legends