Zeldapedia
Register
Don't have an account?
Sign In
Advertisement
in: Articles with non-canonical information, The Legend of Zelda: Spirit Tracks bosses
English

Ocean Temple
Take 'Em All On

Phytops, Barbed Menace (荊毒寄生種 イバラケバラ, Baradoku Kiseishu Ibarakebara?, Ibarakebara, Poison-Barbed Parasite), also known as Cactops, is the boss of the Ocean Temple, the third dungeon in The Legend of Zelda: Spirit Tracks. It is a squid-like creature whose tentacles are covered with sharp barbs, and has a bulbous "brain" protruding from the top of its head. It is somewhat similar to Tentalus, a boss from The Legend of Zelda: Skyward Sword.

Before the battle with Phytops begins, Link must navigate a series of cliffs and posts with his newest item, the Whip. Along the way, he must dodge the occasional falling blob of slime and fend off obstructing tentacles by ripping off a barb from the appendage and hurling it into the visible eye. At the final cliff, he activates and grabs onto a small rotor device, which carries him to the pool containing the boss.

In order to defeat Phytops, Link must use his Whip to pull off one of its barbs when its tentacles emerge from the pool. He must then throw the barb back at Phytops, popping one of the pink blobs covering its eye. After destroying two blobs, Phytops' eye opens and another barb can be thrown to stun it. At this point, Phytops flops onto the side of the pool and is open to attack.

Apart from the threat of its barbs, Phytops also has funnel-like structures protruding from its head, which release damaging globs of purple slime. These slime globs remain on the ground for a while, meaning that Link must watch where he runs. After its eye is attacked, Phytops descends into the pool, extending two more tentacles in an attempt to crush Link. He is safest near the back of the arena, but constant movement is also advised. If he has a moment, Link can also snatch a barb from one of the lower tentacles for an early hit on Phytops when it surfaces.

As Phytops weakens, it fires more slime globs and begins using its extra tentacles even before it is stunned. It also begins moving its tentacles constantly, making it impossible for Link to stand still at one location for too long. Someimes after it is stabbed in the eye, it will sweep Link away with its tentacles before he reaches the eye. Fortunately, Link can remove a barb from one of the tentacles to create a harmless area where he can stand-although Phytops' other attacks can still hit him easily.

Once Phytops has sustained enough damage, it thrashes and screeches before turning grey and exploding into dust, leaving behind a Force Gem for Link and Zelda to collect. 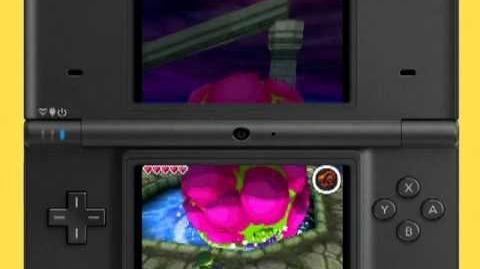 Phytops is likely derived from the prefix phyt-, which refers to plants, and Cyclops, a gargantuan, one-eyed creature from Greek mythology. Its European name Cactops is a more obvious reference to Cactus, due to its spiny tentacles and green skin, and Cyclops due to its one eye. 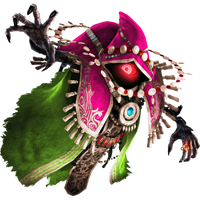 As part of the Phantom Hourglass & Spirit Tracks DLC, Wizzro's Standard Outfit (Grand Travels) is a Phytops Recolor. It can be obtained on the Grand Travels Adventure Map.