Zeldapedia
Register
Don't have an account?
Sign In
Advertisement
in: The Legend of Zelda: Oracle of Ages bosses
English

Plasmarine (プラズマリン, Purazumarin?) is the boss of Jabu-Jabu's Belly, the seventh dungeon in The Legend of Zelda: Oracle of Ages. It is a large and extremely swift-moving jellyfish. It attacks Link by shooting balls of electricity at him, forming an electrical barrier around itself, and charging at Link. To defeat Plasmarine, Link must use the Long Hook to switch places with it when it fires a ball of electricity at him, thus hurting it instead of Link. After a few repetitions of being damaged by its own attack, Plasmarine will be defeated. 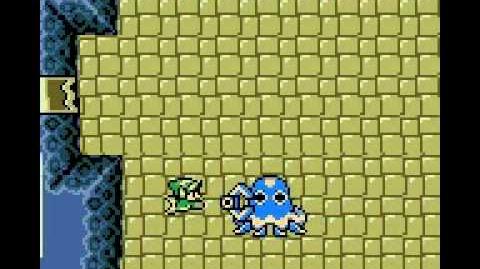 Plasmarine's name is likely a portmanteau of the words "plasma" and "marine". Plasma is a superheated, ionized gas that conducts electricity, which may be a reference to Plasmarine's electrical attacks. The word "marine" denotes something found in or pertaining to the ocean.