"These ghostly creatures have no physical form, so physical attacks pass right through them. Shining light on them with the Mirror Shield makes them take form."
— Figurine

Poes (ポウ, Pou?) are recurring enemies in the Legend of Zelda series. They are ghost-like spirits of deceased beings who hold hatred towards the world and can be found in dark places such as graveyards, empty fields, plains, and caves. Poes are often seen carrying a lantern on their person. A variety of roles are played by Poes in their respective games. However, these roles as well as their appearances have changed over the course of Zelda history.

Poes can be found in the Graveyard to the east of Kakariko Village. They drift around, encircling their graves. At first, Poes only appear if their graves are disturbed. Later, after Agahnim is defeated for the first time and the gate to the Dark World is open, Poes swarm around the cemetery. These Poes will pursue Link, and attack him if he comes near them. They are the Light World equivalent of Hues. 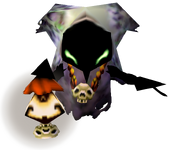 Poes are found in Kakariko Graveyard when Link is both a child and an adult. They can also be found in Hyrule Field when Link is an adult. Once defeated, they drop their soul-housing lanterns, allowing Link to store the spirit of the Poe in an empty bottle and bring them to the Ghost Shop in Hyrule Castle Town where they can be sold for ten Rupees. Link is also able to drink the spirit of a Poe, although doing so usually causes negative effects. If Link Z-targets one for too long, it will disappear and appear once more shortly thereafter, so it is better for Link to attack Poes without Z-targeting them. The ones on Hyrule Field are different than those encountered in the graveyard and have the same design as the Phantom Guide encountered in the Haunted Wasteland. The ones encountered on Hyrule Field do not disappear if Link Z-targets them and attack with fireballs from their lantern. Interestingly, these Poe spawn in the same areas as Big Poes, though only when Link is on foot (as Big Poes will spawn instead if Link is on Epona). As a result they can be useful in discovering exactly where Big Poes spawn on Hyrule Field.

They attack when their graves are disturbed or if Link gets too close to an idle lantern. The color of their eyes denotes how they will act. Green means they will not attempt to attack, yellow means they have been agitated and may attack, and red indicates an incoming attack. They attack by wildly spinning their lanterns. Some Poes wandering Hyrule Field simply circle Link and lob fireballs at him. These do not turn invisible when targeted. Poes let out a distinctive laugh when disappearing, attacking, or if their souls escape from the mortal plane after being left alone for a certain amount of time. Their spirits take the forms of purple, green, or gold fireballs with faces imbued into them that tell Link the temperament of the Poe in question.

Two Poes named Flat and Sharp, collectively the Composer Brothers, play a minor role in the game. They were the ones who wrote the "Sun's Song". There is also a quartet of Poes known as the Poe Sisters that play a part in the completion of the Forest Temple, the first dungeon of the adult portion of the game. Another Poe character named the Phantom Guide helps Link find his way to the Spirit Temple, the fifth dungeon of the adult portion of the game.

In The Legend of Zelda: Ocarina of Time Master Quest, they can be found in dungeons such as Dodongo's Cavern.

Poes are similar in appearance and attack method to Poes from Ocarina of Time. Standard Poes appear only in the inverted Stone Tower Temple. Two Big Poes can be found in this game, one Beneath the Well and one Beneath the Graveyard. The Composer Brothers make another appearance, this time playing a larger role in the story and teaching Link a different song. The Poe Sisters partake in an optional side quest in the Spirit House.

The Clock Poe residing in Yoll Graveyard gives Link a Poe Clock in exchange for helping it into its grave, thus initiating the trading quest for the Noble Sword.

Two Poes serve as the mini-bosses of the Explorer's Crypt, the seventh dungeon in the game. 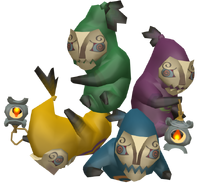 Poes have faces that resemble hannya-masks without horns and their bodies seem to be comprised of brightly colored pajama-like garments. Poes must be exposed to Sunlight to be made tangible. After this has been done, they can be killed with most weapons. In order to do this, Link must first obtain the Mirror Shield and then use it to reflect Sunlight upon them, or use Medli's Harp for the same purpose. Poes can also possess Link, reversing the controls of the game for a short while. If Link is possessed, he does not take damage, but it becomes more difficult for him to avoid hazards and enemy attacks. When possessing Link, their distinctive masks chatter and laugh above his head; Link can instantly remove the possession by entering sunlight, but the Poe that possessed him will disappear after the effects wear off regardless. It also goes away if Link gets hit by an enemy. Poes mostly appear in the Earth Temple, and are ruled by Jalhalla, the boss of said temple, who is composed of fifteen Poes. 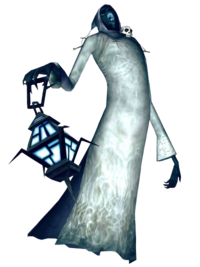 Poes appear in the Arbiter's Grounds. These Poes wear long robes that remain after they have been defeated. Similar to the modus operandi of the Poe Sisters from Ocarina of Time, Four Poes appear and "steal" the fire of four Torches, impeding Link's progress in the game. He then has to hunt them throughout the dungeon by tracking their scent in his wolf form to restore the torches.

Another variety of Poes known as Imp Poes also play a part in one of the game's side-quests. The beta version of the Imp Poe originally had it lacking a lantern and being a solid figure, not a non-corporeal one. This was most likely due to help aid in designing it, because it would have been harder to add details to a more ghostly one.

The appearance of Poes is dramatically different to the ones found in earlier games. Here, they appear inside the Ghost Ship and spit blue fire to attack Link. If Link attempts to attack them from the front, they vanish.

Poes can be found in the Graveyard in Hyrule. Initially, they only show themselves when Link pushes up a gravestone, but they later appear whenever Link approaches the graveyard.

Several types of Poes can be encountered in Tri Force Heroes. The most common are White Poes which easily killed with Link's sword. However Red, Blue, and Green Poes can only be killed by Link of matching color, Blue Link can kill Blue Poes, Red Link can kill Red Poes, and Green Link can kill Green Poes. Besides white, red, blue, and green Poes, there are also a new type of Poe called Prankster Poes. Prankster Poes resemble a ghostly version of Link and relentlessly chase the Links, in order to pick them up and throw them off the platform. Slashing them with Link's sword, causes them to reappear behind Link. They are only vulnerable to attack while holding a Link, meaning the three Links must work together to defeat them. On sole play, Link must switch to another Doppel to attack them while they are carrying a Doppel. Attacking them while they are carrying a Link/Doppel causes them to drop the Link/Doppel they are carrying. Besides Prankster Poes there are Key Bandit Poes who share the same ghostly Link appearance as Prankster Poes. As their name implies they will steal Small Keys from the Links until they are killed. There is also a mini-boss called a Grim Repoe.

It is possible that Poes were named after Edgar Allan Poe, a famous American poet and writer of short-stories. Many of Poe's short-stories contained instances of paranormal phenomena, some of which involve ghosts.