"Both of you, faithless fools who would dare to take up arms against the king of light and shadow... So you choose. And so you shall feel my wrath!"
— Possessed Zelda

Ganon's Puppet, Zelda, also known as Possessed Zelda is a boss from The Legend of Zelda: Twilight Princess. Due to being possessed by Ganondorf, "she" speaks with his voice.

After journeying to the Twilight Realm, restoring the Sols to their rightful place, and defeating Zant, Link returns with Midna to Hyrule Castle to learn what has become of Princess Zelda. In the Throne Room, the pair find Zelda's apparently lifeless body suspended in midair, and Ganondorf seated on the throne below her. After taunting both Link and Midna for a short time, Ganondorf transforms into Twilight particles. Midna attempts to revive Zelda, only to see Twilight particles enter the princess's body, which then becomes possessed by Ganondorf. Zelda's eyes turn yellow, her skin pales and becomes patterned with Twilit symbols, and her hair darkens. She knocks Midna aside, and when Link tries to go to her aid, the possessed Zelda descends to the floor and summons her sword to her hand, as well as summoning a barrier at the area outside the throne room, thus forcing Link and Midna to be separated and unable to help each other.

The Throne Room becomes ringed in a wall of yellow light, similar to the pyramid which had previously encased the castle and prevented Link from entering. Zelda rises into the air and moves around the room as she attacks Link in three ways. First, she causes a glowing Triforce-like shape to appear on the floor and shine brilliantly, which causes Link harm if he does not avoid it. Then, she makes a low dive toward the ground in an attempt to impale Link with her sword, which can be avoided easily by sidestepping. Finally, she "charges" her sword and casts a ball of energy at Link, leaving him no choice but to use the Master Sword to deflect the energy ball back at her, thus beginning a game of Dead Man's Volley. Interestingly, the energy balls can be reflected with an empty bottle as well. If the player takes a significantly long time to damage Zelda, a cutscene will play where Midna will try to give advice to Link on how to beat her.

Each time Zelda is struck with one of the energy balls, Ganondorf can be heard howling in pain. When she has taken three strikes, Zelda falls onto the floor. Midna is then able to remove Ganondorf's influence from her, and Link goes on to face Ganon himself.

If Link has learned at least six of the Hidden Skills by this point, they are advantageous to him in this battle. The Back Slice serves as a quick way to roll out of range of the Triforce attack, and if timed correctly, a Jump Strike, or Jump Attack at close range against an energy sphere can instantly damage the possessed Zelda without a game of Dead Man's Volley. 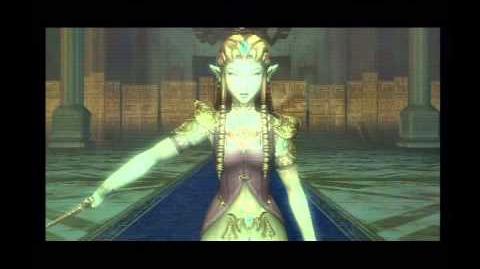 Retrieved from "https://zelda-archive.fandom.com/wiki/Possessed_Zelda?oldid=510779"
Community content is available under CC-BY-SA unless otherwise noted.