Zeldapedia
Register
Don't have an account?
Sign In
Advertisement
in: Articles with non-canonical information, The Legend of Zelda: Oracle of Ages bosses
English

Ramrock (ゴーリガン, Gōrigan?) is the boss of the Ancient Tomb, the eighth and final dungeon in The Legend of Zelda: Oracle of Ages. Ramrock's body has the appearance of a rock statue, with two disembodied hands that can change their shape and function. Ramrock's hands have four forms they can change into.

The room immediately outside Ramrock's chamber contains subtle hints about how to defeat each of the four phases, as the sword, then Bombs, then the Seed Shooter, and finally the Power Glove must be used to clear the obstacles blocking the entrance to the boss room.

While in its first form, Ramrock moves left to right against the back of the room, launching its fists as projectiles, which will home in on Link. Link must reflect them back at its head using his sword. In the second form, the hands are replaced with spiked gauntlets with which Ramrock attempts to crush Link. Link must place a bomb between the two gauntlets to damage Ramrock.

In its third form, Ramrock's hands take the form of shields that resemble huge magnets which have the ability to fire energy balls and lasers. Link must ricochet seeds off the wall using the Seed Shooter in order to hit Ramrock's vulnerable backside. Alternatively, the Seed Shooter can be fired directly into the front of Ramrock, though this must be done at point blank range to prevent Ramrock from blocking the attack with his shields.

In its fourth and final form, the shields are replaced with balls and chains that will fire at Link; once they have been fired, Ramrock slowly attempts to retract the balls and chains. Link must grab a retracted ball and pull it out using the Power Glove, then release it so that it slams into Ramrock. Once Ramrock is defeated, Link can obtain the final Essence of Time, the Falling Star. 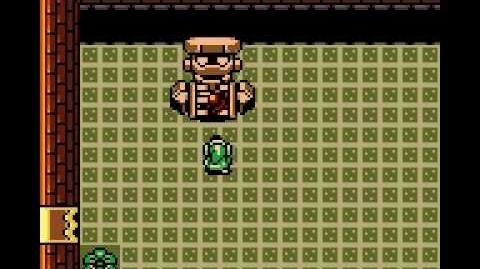 In the manga adaption of Oracle of Ages, Veran summons Ramrock to destroy a village of escaped slaves. Link becomes enraged after it tramples a field, and slashes Ramrock in half.

In the manga, Ramrock has two sets of eyes, rather than just one. Ramrock also has arms and it walks on two legs, rather than levitating. It also does not change its hands into any other form of weapon or shield, like it does in the game.