Zeldapedia
Register
Don't have an account?
Sign In
Advertisement
in: The Legend of Zelda: A Link Between Worlds characters, Hyrule Warriors characters, Hylians
English

"Oooh, you're waking up. Good. I was starting to worry about you, buddy. The name's Ravio. Hey, you listening to me? What the rug tastes really good or something? I'm a traveling merchant. I found you in the Sanctuary. Passed out. Alone. Strange, if you ask me."
— Ravio

Ravio is a character from The Legend of Zelda: A Link Between Worlds. He runs Ravio's Shop, where Link can rent or buy items needed to complete dungeons.

Ravio wears a purple hood that resembles a rabbit. He resembles Bunny Link from A Link to the Past, as well as Nabbit from New Super Mario Bros. U, though the latter has been debunked as a coincidence by Satoru Iwata.

Shortly after Link fails to stop Yuga from abducting Seres from the sanctuary, Ravio, passing by the sanctuary, saves Link and brings him back to his house. After Link awakens, he grants Ravio permission to stay in his house, where Ravio sets up his shop. Additionally, he gives Link his bracelet.

Initially, Ravio will only rent items to Link and will send Sheerow to retrieve any rented items should Link fall in battle. He will begin selling off his wares after Link finds the Master Sword, and will thank Link for allowing him to make enough Rupees to retire early if every item in his shop is bought.

After Yuga-Ganon and Princess Hilda are defeated and Princess Zelda is freed, Ravio enters Lorule, where it is revealed that he is the Lorulian counterpart to Link. A servant of Hilda's, Ravio did not agree with her plan to steal Hyrule's Triforce. He was afraid to stand up to them, however, so he fled Lorule, hoping to find a hero who could stop Hilda and Yuga. He successfully convinces Hilda that stealing Hyrule's Triforce would only bring out the worst in Lorule, which was exactly the scenario their forebears had hoped to avoid when they destroyed Lorule's Triforce, and the two see Link and Zelda off as they return to their own world.

After Link and Zelda wish on Hyrule's Triforce to restore Lorule's Triforce, Ravio and Hilda are seen in the Sacred Realm of Lorule as the clouds part and their Triforce is restored.

Unlike Link, Ravio is a coward and lazy, which is in sharp contrast to Link's courage and adventurous personality. He does however, have a kind heart like his counterpart. Like Link, Ravio carries a large assortment of items and weapons (save for a Sword and Shield) which he rents to his counterpart, though later will offer to let Link purchase them from him. Also like Link, Ravio cares for his homeland and Lorule's Princess Hilda who Ravio was a faithful servant of until she decided to steal Hyrule's Triforce. Ravio realized the consequences of Hilda's plans and that her desire to steal the Hyrule's Triforce, was the very reason her predecessors destroyed Lorule's Triforce showing that Ravio possesses great wisdom and a noble heart, though his lack of courage prevents him from taking on the role of Lorule's Hero. As evidenced by his diary, Ravio also distrusted Yuga, and suspected the latter's true nature from the start as a "leech" and that he was duping Hilda into making the situation even worse, with his suspicions ultimately being proven correct when Yuga backstabbed her late in the game.

However, despite his opposition to Hilda and Yuga's actions, he was too much of a coward to actively oppose them, instead he decided to seek out his heroic counterpart and assist him though chose to keep his true identity hidden from Link. Despite his decision to aid his counterpart, Ravio appears to have the mindset of a merchant, providing Link with equipment and items in exchange for Rupees, hinting that Ravio is somewhat greedy when it comes to money, and he is shown to be protective of the large sack he carries his rupees in. It is implied that through his interactions with his counterpart, that Ravio has gained a better understanding of himself and even suggests that some of Link's courage may have rubbed off on him. This is shown by his willingness to confront Hilda over the consequences of stealing Hyrule's Triforce, ultimately managing to dissuade Hilda from stealing the Triforce. It should also be noted that he greatly aided Link in his quest through the various items he supplied to Link and by giving Link his Bracelet he enabled Link to escape from being permanently transformed into a painting by Yuga. These actions coupled with his showing Hilda the error of her ways, ultimately lead to Link and Zelda to use Hyrule's Triforce to restore Lorule's Triforce, restoring the Kingdom of Lorule something which both he and Hilda were grateful for.

"The hood of a traveling merchant who had a bracelet that could turn the wearer into a painting. Wearing it increases your sideways climbing speed. It's a rather rare find."
— Ravio's Hood description

As part of "The Champions' Ballad" DLC in The Legend of Zelda: Breath of the Wild, Link can acquire a thematic piece of head Armor called Ravio's Hood which is based on the Bunny Hood and scarf Ravio wears in A Link Between Words. The hood increases Link's sideways climbing speed when worn which is a tongue-in-cheek reference to the ability of Ravio's Bracelet to allow Link in A Link Between Worlds to merge with walls allowing him to move along walls as a 2-dimensional painting.

The hood is obtained during the Side Quest "EX Treasure: Merchant Hood". During the quest Link is tasked with recovering Ravio's Hood which was stolen from the Royal Family of Hyrule's collection of historically significant Armor within Hyrule Castle by the bandit Misko during the Great Calamity. Link must read Misko's EX Journal 2 in the Deya Village Ruins to learn of its location in an EX Treasure Chest buried under the right hand of the stone dragon of Dracozu Lake that contains the Spring of Courage. 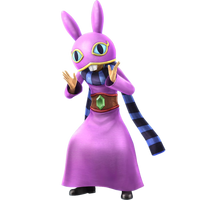 As part of the A Link Between Worlds DLC, Ravio appears as a new playable DLC character. He wields the Rental Hammer as his primary weapon, but he also uses the various items that appear in Hyrule Warriors Legends such as Super Bombs and Gale Boomerang, as well as the Rental Ice Rod and Bow of Light from A Link Between Worlds. Interestingly, he has been slightly redesigned to resemble the Hyrule Warriors incarnation of Link in both size and body proportions. There is a noticeable resemblance between his and Link's head models (especially their hair).

Ravio wielding his Rental Hammer from the Hyrule Warriors series