The Legend of Zelda
Oracle of Ages
Oracle of Seasons

The Red Ring is a recurring item in the Legend of Zelda series. It is a ring set with a large red stone; its functions vary depending on the game in which it appears.

The Red Ring cuts the damage from enemy attacks done to Link by three quarters, whereas the Blue Ring cuts the damage by only one half. The ring can be obtained in Level 9 (both during the 1st and 2nd quests), the final dungeon in the game. Many players criticize this as being too late into the game for it to warrant much usefulness.

When Link wears the Red Ring, his previously green tunic will turn red. Likely due to technical limitations of the console, other objects that were the same color as Link's tunic will also turn red, including the dot that represents Link on the map, parts of arrows and the raft, and the clothing of shop owners and Princess Zelda.

The Red Ring can be obtained after defeating the Golden Darknut, Golden Lynel, Golden Moblin and Golden Octorok. After defeating them, Link must use the stump east of Gnarled Root Dungeon to change the season to summer. South of the dungeon, Link will find a dry patch of ground with a staircase. Inside is an Old Man who will give Link the Red Ring. As an alternative, the Red Ring may be gained as a treasure hidden inside a Gasha Nut, however, the odds of this occurring are minimal at best.

The Red Ring doubles the amount of damage done by Link's sword. It is similar to the Power Rings, but without repercussions to defense. It is useful for fighting strong monsters, and is even effective against bosses. In combination with the Master Sword or Biggoron's Sword, it will kill any damageable standard enemy in one hit except the Blue Lynel, which would require two.

Unless a Linked Game is created on Oracle of Ages and the ring is transferred to it using the Ring Secret, it is impossible to obtain this ring in Oracle of Ages.

The Red Ring appears Wizzro's Level 2 weapon in his Ring moveset. Interestingly, despite the Blue Ring being Wizzro's default level one weapon, Wizzro is often depicted using and wearing the Red Ring when he is fought in the story and in promotional material. Wizzro's Silver Material drop is called Wizzro's Ring which is depicted as a Red Ring.

The 8-Bit Red Ring appears as Midna's 8-bit weapon in her Shackle moveset. 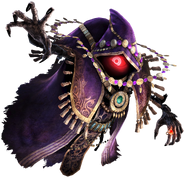 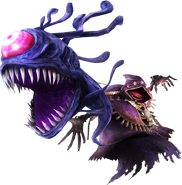