Zeldapedia
Register
Don't have an account?
Sign In
Advertisement
in: Articles with non-canonical information, The Legend of Zelda: Skyward Sword items, Hyrule Warriors items,
and 2 more

"You got the Sailcloth! Now you can jump from any height without fear of a painful landing! ...It smells nice too."
— In-game description

The Sailcloth is an recurring item in the Legend of Zelda series. It is an item similar to the Deku Leaf that allows Link to safely fall to the ground grom great heights.

The Sailcloth is made by Zelda to give to the winner of the Wing Ceremony as part of the ritual. Prior to the ceremony Zelda wears it as a shawl. To her delight, Link is the champion of the Wing Ceremony to whom she gives the Sailcloth. Link can use it like a parachute to float slowly to the ground, or to catch updrafts so as to propel himself into the air. However he is unable to move laterally while using the Sailcloth. The Sailcloth is used to land safely when dropping from Skyloft to the surface. It is also used by Link to return to the Sky after selecting the option from a Bird Statue (which will generate a mystical updraft that carries Link allow the way up to The Sky).

According to Zelda, Hylia gave a similar piece of clothing to her hero. Strangely, Link can use it for a fall of any height, even whilst walking down stairs. Some areas (such as when entering Skyloft from The Sky) Link will automatically activate it if the button is not pressed.

The Legend of Zelda: Breath of the Wild beta

In early gameplay trailers and builds, the Sailcloth appeared as an item. However in the final version, Link uses a new but similar item called the Paraglider. The Sailcloth might have been chosen as a first concept or placeholder until the final decision or development completion. 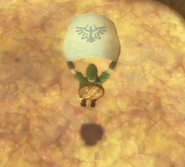