"This fearsome monster inhabits the deepest recesses of the Earth Temple. It can be categorized as a Pyroclastic Fiend."
— Fi

Pyroclastic Fiend, Scaldera (獄炎大岩 ベラ・ダーマ, Gokuen Taigan Bera Dāma?, Hellfire Boulder: Bera Dama) is the boss of the Earth Temple, the second dungeon in The Legend of Zelda: Skyward Sword. It is a large boulder-esque creature with many legs. After Zelda eludes him with Impa's help, a furious Ghirahim summons Scaldera to kill Link as a way to cheer himself up. It was originally a large boulder that was used as a trap designed to crush anybody that obtained the Dragon Sculpture; however, it was transformed by Ghirahim.

Scaldera will chase Link up the ramp, attempting to bite him if he's close. Throwing a bomb at it will cause it to roll back down the ramp. It immediately retaliates by inhaling and spitting large fireballs. Link must throw a bomb into the boss' mouth while Scaldera is inhaling, stunning it and exposing its vulnerable eye. Link can then attack the eye, though this is somewhat tricky as the eye can move around and position itself in various ways, requiring different slashes. As Link repeatedly throws bombs in Scaldera's mouth, the rock surrounding it will disappear, making it much easier to slash its eye. Link must beware when Scaldera moves to the top of the ramp, as this is the precursor to the boss rolling down the ramp and attempting to crush Link. If low on hearts, Link can find some Heart Flowers at the top of the ramp. Link must repeat the strategy to defeat Scaldera.

After the final strike, Scaldera will shrink and vanish, and a Heart Container will appear. 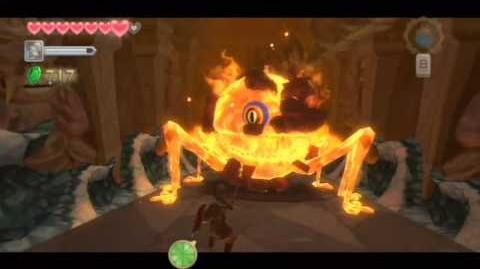 The name Scaldera is likely a portmanteau of "scald", which is a burn caused by liquid or steam, and "caldera", a cauldron-like volcanic feature usually formed by the collapse of land following a volcanic eruption.