The Shadow Temple is one of five major temples in Hyrule that was constructed to house five of the Seven Sages. It is generally believed that the Shadow Folk, the Sheikahs, built the temple for purposes unknown. The temple lies at the back of Kakariko Graveyard in the shadow of Death Mountain. Very little of the temple is above ground, and as such, it is often referred to as the "House of the Dead". When the Phantom Shadow Beast, Bongo Bongo, breaks free from his prison at the bottom of the Well of Three Features in Kakariko Village where he was sealed years before by Impa, it retreats to a large chamber in the recesses of the Shadow Temple. Impa then goes to the temple in an attempt to seal away Bongo Bongo again. At the very bottom of the temple, Link must face Bongo Bongo with the help of the Lens of Truth, the Fairy Bow and the Master Sword. Upon its defeat, the Shadow Temple is cleansed of evil and Impa awakens as the Sage of Shadow.

The Shadow Temple is located on the ledge in the far east side of Kakariko Graveyard and can be accessed only with the help of the "Nocturne of Shadow". The temple consists of four floors infested with ReDeads and holds a number of paintings illustrating spirits that whisper clues and warnings. It includes many invisible enemies, false walls and false floors, making a near-continuous use of the Lens of Truth necessary for beginning players. Link can enter the temple both as a child and as an adult, but due to the pit at the start, which requires the Hookshot to cross, child Link cannot advance much further.

The main items in the Shadow Temple are the Hover Boots, which are acquired quite early by defeating the temple's mini-boss, Dead Hand. Using the Hover Boots is the only way to cross the Valley of the Dead and further explore the temple. The Iron Boots can be used to to get across the hallways with fans to prevent being blown off, but Link can walk across without them if he is patient and waits for the fans to stop spinning before walking past them. The temple has a prominent theme of the smiling skull or hooded skull. These can be seen in multiple pictures on the wall, and they often whisper warnings or advice that only Navi seems to be able to hear.

The temple's design is somewhat different than other temples. Instead of being a standard architectural design, the temple simply goes further and further into the ground, making it the most linear dungeon out of the five major temples, in direct contrast to the Water Temple. Often gallows and whipping posts are depicted in some of the lower chambers, sometimes with spots of blood on the ground below or near them. The dungeon also has a recurring theme of spikes and guillotines. It is akin to the appearance of an ossuary, lined with catacombs full of skulls and bones throughout many rooms. In-game dialogue further suggests that it is used to house the remains of the fallen, and likely during a chaotic period during Hyrule's existence.

Near the boss chamber is a large ferry that will move when "Zelda's Lullaby" is played. While the boat is traversing a small river, a couple of Stalfos appear which can either be defeated or ignored. Once at the other end of the river, Link must leap off the ferry to continue the way through the final area of the dungeon. 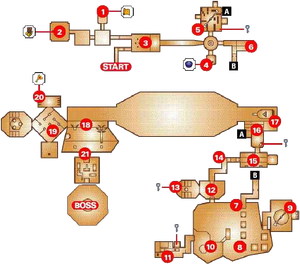 In the Master Quest re-releases, several changes have been made to the dungeon. The Fire Arrow is necessary to solve several puzzles. The Hover Boots are found in the same area but a Small Key found deeper in the dungeon is required to get them. Many of the walls that require the Lens of Truth to see through now have added obstructions such as Weak Walls or a Stone of Time making the Lens of Truth even more important. Unlike most dungeons in Master Quest, the order in which the rooms are visited is the same and the dungeon contains no new enemies.

One theory about the original intention of the Shadow Temple is that it was built to absorb and concentrate all the "evil" and negative feelings of Hyrule such as greed, hatred, jealousy, etc.; all of which can form a breeding ground for what will come to grow into a corrupted world. Assuming that this statement is plausible, it would mean that the Shadow Temple was in fact built for the purpose of preserving peace and calm in Hyrule, making sure it would remain a healthy and prosperous country by simply taking in all conceivable malice and negative emotions, and not to be a dark, twisted torture chamber which is easily assumed by the interiors and overall eerie feel the temple offers. Subsequently, this would mean that the Shadow Temple would have to reap the penalty of the wrongdoings of the entire world of Hyrule. Again, if plausible, this could certainly reduce the temple to nothing more than a frightening, distorted nightmare accordingly. This theory is based upon clues whispered by Skull Paintings in the Shadow Temple.

Because of the presence of many torture and execution devices, it is also believed that the Shadow Temple could have been used for human sacrifice. Why this potential sacrifice took place is however unknown, bringing doubt to this theory.

Another more likely possibility is the temple was used by the Sheikah to punish and imprison enemies of the Royal Family of Hyrule, similar to the original purpose of the Arbiter's Grounds in The Legend of Zelda: Twilight Princess. This is due to similarities between the two dungeons as they contain many Ghosts and undead enemies, presumably the tormented souls and animated corpses of prisoners once held there. This could also explain the temples layout as a design to prevent escape, possibly even designed to contain their evil souls, to prevent them from taking revenge on the living.

In addition to being a temple it may have also been used a sort of Training Ground for the Sheikah similar to the Gerudo's Training Ground. The Temple's overall layout and disturbing feel would serve well to test a Shiekah's combat skills and mental fortitude.

Due to the Temple's location in Kakariko Graveyard, close proximity to Kakariko Village a former Sheikah village, the Sheikah association with shadows such as being called the "Shadows of Hyruleans" or "Shadow Folk", and Impa status as the Sage of Shadow. The Sheikah may have served as the Temple's guardians similar to the relationships between the Kokiri and the Forest Temple, the Gorons and the Fire Temple, the Zoras and the Water Temple, the Gerudo and the Spirit Temple, and Hylians and the Temple of Time. The Sheikah may have used the Temple for a variety of purposes pertaining to their role as the Royal Family's protectors, such being used as a prison, as a training ground, or both. Given the Sheikah's shadowy nature, it is possible they used the temple to perform some of their more questionable activities in secret away from Kakariko's civilian populace. Examples may have included imprisonment, interrogation, torture, and/or execution of Hyrule's enemies; namely criminals, traitors, or foreign spies.

Bottom of the Well

Due to their similar theme and close proximity, it is possible that the Bottom of the Well and Shadow Temple are somehow related, either serving a similar purpose and/or even as part of a Sheikah controlled prison system.

It is possible that the raven-like statue found all over the Shadow Temple symbolizes the dungeon's patron deity. This statue is never mentioned, but it is seen quite often throughout the temple. This raven-like being could very well be a god or goddess to the Sheikah, though neither Sheik nor Impa ever mention a patron deity of the Shadow Folk. Additionally, all of the other adult dungeons seem to have their own representations. Another fact supporting this theory is that this statue is present in the Bottom of the Well, another area that has been linked with the Sheikah.

The strange, circular symbol imprinted on the ground near the entrance to the temple greatly resembles the Mirror of Twilight. Although seemingly unlikely, it is possible that The Legend of Zelda: Twilight Princess drew inspiration from this symbol. If so, this furthers the theory that the Twili are indeed Sheikah.