Zeldapedia
Register
Don't have an account?
Sign In
Advertisement
in: The Legend of Zelda: Spirit Tracks bosses, Undead
English

Sand Temple
Take 'Em All On

Skeldritch, Ancient Demon (古代魔人族 ドスボーン, Kodai Majinzoku Dosubōn?, Dosbone, Ancient Demon), also known as Capbone, is the boss of the Sand Temple, the fifth dungeon in The Legend of Zelda: Spirit Tracks. Skeldritch is a giant helmeted skull with a long, thick spinal column that extends into the room's sandy floor, with armor plating on all but the lowest two sections. Skeldritch can be faced again in the third level of Take 'Em All On.

Skeldritch utilizes two modes of attack: launching a boulder from the lowest vertebrae of his spinal column, and firing a beam from his mouth. Link must use the Sand Wand to stop the boulder and maneuver it to one of the four launchers in the room. With the boulder in place, he must then strike the crystal next to the launcher to fire the boulder at Skeldritch, which shatters a segment of his spine. After the unarmored segments are destroyed, Link must place a boulder and circle around the boss until the gap in his armor is facing the boulder. Then he must strike the crystal from a distance using the Bow or Boomerang. When Skeldritch is down to his last segment, the boulders he launches are red and have greater velocity, which means that Link must use more sand to slow them down and work quickly to move them before another boulder clashes with it and shatters both. He also uses a laser that follows Link.

When his spine is completely destroyed, Skeldritch's helmet falls off, revealing a large purple jewel. Link must use the Sand Wand to hold Skeldritch in place, allowing Link to circle around him and attack the jewel. After sustaining enough damage, Skeldritch is defeated. 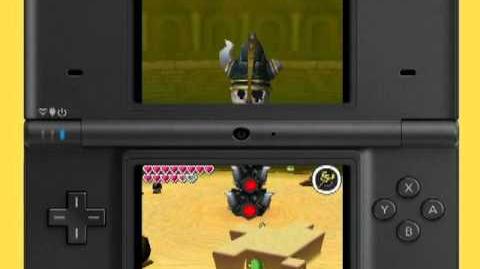 "Skeldritch" is a portmanteau of skeleton and eldritch, an adjective originating from the Middle Ages, used to describe something eerie or supernatural. The European name, Capbone is an even more obvious reference, derived from cap which some bones have, and obviously bone. Cap may also be a reference to the large helmet or cap it wears.