"It's time for our little game. I break apart. If you can force me back together and blow me away, it ends. But before you do I shall take a bit of your soul!!! Now begin!"
— Smog

Smog (バロム, Baromu?) is the boss of the Crown Dungeon, the fifth dungeon in The Legend of Zelda: Oracle of Ages. Smog is a unique boss in Legend of Zelda history; it is more of a puzzle boss rather than a regular boss. When Link enters the boss room, Smog challenges him to play its "little game". Smog dares Link to use his newly found Cane of Somaria to force its body back together after it breaks itself apart. As its name may suggest, Smog resembles a ball of smoke.

As the battle begins, Smog breaks into either two or three smaller pieces of itself. These will then follow the outlines of the various block-formations that Smog also creates. Link must use his Cane of Somaria to add a block to the formation so that the pieces will run into each other. When all pieces are back together, Smog will become vulnerable to Link's sword. Though it appears to be defeated after only one round, it will come back for an additional three before being completely destroyed. As the battle goes on, the formations will grow more complex and challenging, often forcing Link to push around some of the blocks to gain advantage. Link may hit Smog pieces with the sword, causing them to freeze temporarily. This can be used to time the unification of two pieces. If Link dispels a block from the Cane of Somaria while a Smog piece is occupying it, the said piece will disperse and return to its original location, even if it was moved to another place prior. During the battle, the Smog pieces launch blue energy clouds at Link, and when fully reunited, Smog fires off electric bolts. When Smog is fully formed, Link must be careful not to directly touch him, otherwise he'll get zapped for damage.

A reset-button that can restart the round appears in the upper left corner, though it will cost one full heart when stepped on. 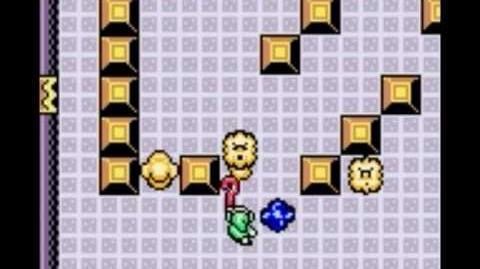