Zeldapedia
Register
Don't have an account?
Sign In
Advertisement
in: Temples, The Legend of Zelda: Majora's Mask dungeons
English

"What's that? There's something in the middle of that blizzard... Can't you see it?"
— Tatl

Snowhead Temple is the second dungeon in The Legend of Zelda: Majora's Mask. Entrance to the temple itself is blocked by a fell wind that deters all who would proceed, which is being caused by an invisible Biggoron, who acts as the temple guard under the order of the Goron Elder. Interestingly, while the dungeon consists of mostly ice and caverns, lava can incongruously be found within its bounds.

Upon arriving in the Snowhead region, Link finds a majority of it covered in snow due to a curse placed on the region by the Skull Kid, causing perpetual winter. He makes his way to the Goron Village and encounters the wise owl Kaepora Gaebora, who tells him about an item hidden inside the Lone Peak Shrine. The owl shows Link how to safely navigate his way across the seemingly impassable chasm between the village and the shrine, and inside the cave, Link finds the Lens of Truth, which allows him to see through illusions. Link uses it to safely find his way back to the village, where he he is now able to see the ghost of Darmani. Startled to find that Link is able to see him, Darmani asks him to follow him to his grave in the Goron Graveyard. At the grave, Link plays the "Song of Healing" and seals Darmani's healed spirit within the Goron Mask, allowing the hero to transform into a Goron. The Gorons mistake Link for Darmani; inside the Goron Shrine, the Goron Elder's Son is missing his father, the Goron Elder, whom Link goes in search of. Ironically, the elder is the only one who sees through Link's disguise and initially decides that he must be a figment of imagination; however, upon hearing that his son is in distress due to his absence, he teaches Link his son's favorite lullaby; however, he can only remember part of it.

Link returns to the Goron Shrine and plays the unfinished song for the Goron Elder's Son, who recognizes the song and immediately teaches Link the full song, accidentally causing himself to fall asleep. Link travels to the Snowhead Temple, only to find himself deterred by a strong wind. As a Goron, Link plays the "Goron Lullaby" on the Drums of Sleep, rendering Biggoron visible and causing him to fall asleep. Link is able to pass on to the Snowhead Temple, inside of which he encounters and defeats Goht; after recovering Goht's remains, Link rescues one of the Four Giants and breaks the curse placed on Snowhead, bringing spring back to the mountain.

The Goron Mask is used often here to move heavy blocks. In this dungeon, Link receives Fire Arrows after defeating a Wizzrobe mini-boss. The boss of the temple is the Masked Mechanical Monster, Goht. After its defeat, Link receives a full Heart Container and Goht's remains. To find most of the Stray Fairies, the Lens of Truth and the Great Fairy's Mask are used often. If Link is able to collect all fifteen Stray Fairies in the dungeon and return them to the Great Fairy Fountain in Snowhead, his reward is a Magic Meter upgrade.

The temple is a tower of five levels, four floor levels and one basement level. Most of the temple is frozen and filled with snow, but the bottom levels are hotter with lava. The objective of this temple is to go up, ascending through one main shaft, which requires Goron Link to roll across. 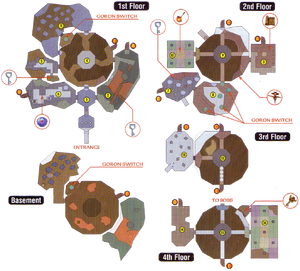