This article is about the Twilight Princess item. For the Phantom Hourglass enemy, see Shell Spinner.

"You got the Spinner! This ancient machine allows you to float in the air."
— In-game description

The Spinner is an item from The Legend of Zelda: Twilight Princess. It is an ancient device found within the Arbiter's Grounds, and its appearance is that of a large top with a gear along the outer edge. The Spinner has three main uses. It can attach itself to certain rails on walls, and since Link stands on it, he is able to ride on top of the Spinner up to areas he could not normally reach. The Spinner can jump from one rail to another if the second rail is located on the opposite wall. Additionally, Link can use the spinner to cross areas of quicksand or weak floor tiles such as the ones of City in the Sky, and even to quickly and safely navigate across patches of ice in Snowpeak Ruins. Inside dungeons, the Spinner can be fit into certain holes in the ground where a gear would normally be. Spinning the Spinner will turn the gears, usually causing part of the dungeon to move, such as stairs, platforms, and bridges. If not used along a rail, it eventually loses speed and stops.

The Spinner can also be used as a weapon, though to a much lesser extent than most other items. Pressing A (or B in the Wii Version) while riding the Spinner on the ground makes it spin hop for a split instant. This attack does minimal damage to enemies, but is invaluable when fighting Stallord. It is initially used to break Stallord's spine; Link can then damage Stallord by slamming it into his head with the Spinner's attack.

Both inside and outside the dungeon, Link can use the Spinner to jump from heights that would normally cause him to incur damage when he hits the ground. For example, he can safely ride the Spinner off the top of Kakariko Village's Lookout Tower and down to the thoroughfare below, a fall he would normally incur damage from were he to jump off it without the Spinner. However it should be noted that Link cannot activate the Spinner in mid-freefall so, this method only works if Link rides the Spinner the whole way down. This ability to negate damage from fall-to-ground damage is most likely an intentional part of the Spinner's game design, as the Spinner is used to ride Spinner Tracks elevated high off the ground and allows Link to fall off a elevated track without incurring such damage.

It is possible that the Oocca also designed the Spinner along with the Clawshot. This can be explained through similarities in design and the fact that the Oocca have Spinner gear holes, but have fallen out of communication with Hyrule, which is the where the item would have been designed if not in City in the Sky. Also, the majority of weapons and tools built in Hyrule are often old fashioned, but the fact that the Spinner is a disk that rotates at high speeds on the outer rim, but rotates the inner rim simultaneously, so that the user does not spin much, would suggest it is far more advanced than most other items in Twilight Princess.

One possible in-universe explanation for how it can negate damage from falling is the centrifugal force generated by the Spinner could cushion Link landing as he hits the ground, absorbing part of the impact force and preventing him from incurring damage.

The Spinner is featured as a sticker. The sticker gives a +4 bonus to spinning attacks, and can be applied to any character. 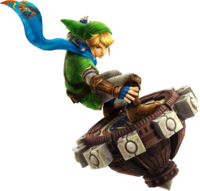