"Ganondorf and his minions are using the Spirit Temple as a hideout. Only the Silver Gauntlets will allow me to sneak deep into the temple. Once there, I'm going to steal all the treasure inside and mess up their plans!"
— Nabooru

The Spirit Temple (魂の神殿, Tamashī no Shinden?) is the eighth dungeon in The Legend of Zelda: Ocarina of Time. It lies within the Desert Colossus, to the west of the Haunted Wasteland.

After traversing the Haunted Wasteland and reaching the Desert Colossus, Link enters the Spirit Temple, but finds no way to proceed beyond the foyer. Exiting the temple, he meets Sheik again. Sheik tells Link that he must travel back in time in order to make it through the Spirit Temple and awaken the Sage. Sheik disappears after teaching Link the "Requiem of Spirit". Link then travels back to the Temple of Time, and places the Master Sword in its pedestal, returning him to the past. Now a child, Link uses the "Requiem of Spirit" to warp back to the Desert Colossus and enter the Spirit Temple. He meets Nabooru, who asks him to retrieve the Silver Gauntlets for her since she is too large to get through the tiny passage that leads into the temple. Link travels into the temple and finds Kaepora Gaebora, who gives Link his final piece of information and then bids him goodbye. He finds the Treasure Chest containing the Silver Gauntlets. Suddenly, a sandstorm begins blowing, and Link sees Nabooru being sucked into a vortex by the evil Gerudo witches Koume and Kotake.

Link keeps the Silver Gauntlets, travels to the future, and reenters the Spirit Temple. Inside, he obtains the Mirror Shield, and with the help of Sunlight and a giant mirror, opens the way to the area where Koume and Kotake dwell. In a small antechamber, Link comes upon a strange Iron Knuckle, who is revealed to be a brainwashed Nabooru, after being defeated. Koume and Kotake suddenly appear and teleport Nabooru elsewhere to brainwash her again and escape into the boss room, where Link battles them. After defeating them, Link is transported into the Chamber of Sages. Within the chamber, Nabooru is revealed to be the Sage of Spirit. She gives him the Spirit Medallion and adds her power to his.

The Spirit Temple's architecture and music seem to be influenced by ancient Egyptian and Arabic culture. The temple itself is located inside a gigantic statue of the Goddess of the Sand. The Temple is divided into two nearly symmetrical portions--one accessible only when Link is a child and the other only when he is an adult, though adult Link can use the Longshot to hook over to the child section. Each side leads to a large hand outside the Temple, each of which hold a treasure for Link. The child Link portion holds the Silver Gauntlets, which allow Link to access the adult portion holding the Mirror Shield. The apex of the Temple design involves entering the top floor access route, to activate the Sunlight that shines into the main room, which Link uses to reach the Iron Knuckle mini-boss and Twinrova. 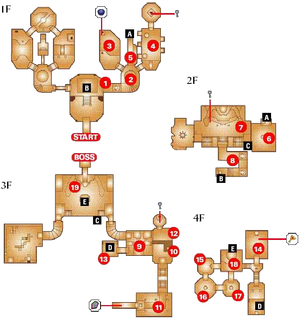 In the Master Quest re-releases, several changes have been made to the dungeon, including puzzles and the order in which rooms are visited. Some puzzles include collecting Silver Rupees, using the "Song of Time" to create Stones of Time that have boxes used to compress switches on them and playing several Ocarina Songs to gain access to a room. Once Link has obtained the Silver Gauntlets to gain access to deeper parts of the dungeon he must use the Hookshot to reach an area that was previously a short cut. It also features several new enemies such as Dinolfos, Gibdos, Leevers and a Club Moblin. Interestingly many of the rooms in this dungeon do not need to be visited in order to reach the boss. These rooms instead hold several Gold Skulltulas that can only be obtained after solving difficult puzzles.

It is possible that the snake statues found all over the Spirit Temple symbolize the dungeon's patron deity. This statue is never mentioned, but it is seen quite often throughout the temple. Also, all of the other adult dungeons seem to have their own representations, which furthers this concept. It is possible that the Goddess of the Sand serves this purpose as well.

The Spirit Temple is widely considered to be the fifth and final temple in the game before Ganon's Castle, as evidenced by the fact that almost every guide and walkthrough, including the one published by Nintendo, list it as the fifth, and is the last mentioned by Sheik when he informs Link about the temples in which the sages are found. It is, however, speculated that it may actually be the fourth because the Spirit Medallion and the "Requiem of Spirit" are placed behind the Shadow Medallion and the "Nocturne of Shadow" respectively. Additionally, it is possible to complete the entire Spirit Temple before completing the Shadow Temple, although the Hover Boots from the Shadow Temple do aid quite a bit in this dungeon

Another hint that it may have been originally intended as the second to last temple, is that Sheik does not inform the player that they can return to the past before the Shadow Temple, but rather, before the Spirit Temple. This knowledge should seemingly have been provided before embarking on a certain part of the quest to gain access to the Shadow Temple, in which Link must travel back in time to obtain the Lens of Truth from the Bottom of the Well. However, the Lens of Truth itself is needed to summon the guide that leads Link to the Desert Colossus in the Haunted Wasteland. This implies that the Spirit Temple is likely meant to be completed after the Shadow Temple.

It may also be intended that the Spirit Temple and the Shadow Temple can be completed in either order. This is suggested by the overworld map subscreen where both the dots pinpointing the locations of the Gerudo Valley and Kakariko Village are both flashing once the Water Temple has been completed, indicating that Link may travel to either of these locations to progress through the story.