Zeldapedia
Register
Don't have an account?
Sign In
Advertisement
in: Articles with non-canonical information, The Legend of Zelda: Spirit Tracks bosses
English

Forest Temple
Take 'Em All On

Stagnox, Armored Colossus (甲殻巨大種 デグクレス, Kōkaku Kyodaishu Degukuresu?, Degucles, Armored Colossus), also known as Armoured Beetle, is the boss of the Forest Temple, the first dungeon in The Legend of Zelda: Spirit Tracks. Stagnox is a giant hercules beetle with the power of flight and a noticeable purple abdomen. Stagnox can also be battled again as part of the Take 'Em All On mini-game.

In the first phase of the battle, Stagnox remains on the ground, fixing its gaze on Link until he stops moving. Once Link stops moving for a short while, Stagnox will lunge at him, allowing Link to circle around it. Alternatively, Link can strike Stagnox's face with his sword to provoke it to attack, but it may also swat Link with its foreleg if he doesn't move away quickly enough. He must then use the Whirlwind to remove the Dark Matter covering the boss's abdomen, rendering it vulnerable to the sword. After sustaining enough damage, Stagnox takes flight and the second phase begins. In this phase, it stays out of Link's attack range. After being suspended in air for a short while, Stagnox flies towards Link and drops Blastworms near him. When struck, these blue larvae curl into spiky balls that explode upon impact or after a set amount of time. Once one has curled into a ball, Link can use the Whirlwind to blow them towards Stagnox when it attacks again, stunning it and leaving its abdomen vulnerable once more. Once it has sustained enough damage, it falls onto its back and explodes. 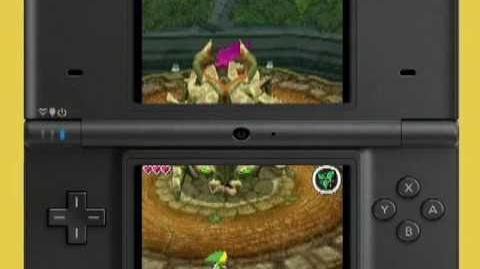 Stagnox appears as a collectible trophy.