"You still live... How astonishing. No wonder some call you "hero". But this is truly a bittersweet reunion... Truly! For I fear this is the last time I will see you alive!"
— Zant before resurrecting Stallord.

Twilit Fossil, Stallord (蘇生古代竜 ハーラ・ジガント, Sosei Kodai Ryū Hāra-Jiganto?, Resurrected Ancient Dragon Hahra Gigant) is the boss of the Arbiter's Grounds, the fourth dungeon in The Legend of Zelda: Twilight Princess. Stallord is the skeleton of a giant dead beast found inside the Arbiter's Grounds. It has a roughly humanoid upper body protruding from a pit of sand, and a horned animal head comparable to a goat or dragon. Its lower body is never seen; in fact, whether its lower portions were even present at the time is unknown. Several weapons are embedded in the beast's skull, possibly the cause of its death. The music played during the battle against Stallord incorporates, partly, reinstrumentalized versions of the music played during the battles against King Dodongo and Volvagia in The Legend of Zelda: Ocarina of Time. By name, it is the king of the Stalfos in Arbiter's Grounds.

While Link is searching for the Mirror of Twilight in the Arbiter's Grounds, he comes upon a huge skeleton in the chamber of the dungeon's boss. Zant then appears and plunges the Scimitar of Twilight into the skull of the remains, reanimating them as Stallord.

The only way to damage Stallord is by tackling its lower spinal vertebrae with the Spinner. Stallord will try to keep Link away by summoning Staltroops and spitting blasts of dark fire from its mouth. The wall surrounding the pit has a Spinner track, along which several Blade Traps continuously circle. Link must destroy the lowest vertebrae three times, causing the beast to fall. Each time a vertebra is shattered, Stallord falls a bit and summons a greater number of Staltroops to impede Link, especially when Link draws close to its body. Hitting these creatures causes Link to bounce back; they can be defeated in one hit using the Spinner's attack, but they will still force Link away with the impact. On the final impact to the spine, Stallord falls over and sinks into the sand, which then recedes, exposing Stallord's skull and a Spinner slot in the floor. Activating this will cause a wide column to rise.

However, Stallord comes alive once more. Its head starts floating and pushes Link into the large circular pit surrounding them. The central column has spiral Spinner tracks leading up, while the walls have a series of parallel tracks. Link must use the Spinner along the column to rise higher; at a certain height Stallord will show itself and start spitting fireballs in an attempt to knock him down. Link must jump between the wall and the column to avoid Stallord's attacks. Each jump brings Link a little closer to the floating head, but also brings Link lower; too many jumps will bring him back to the floor. If Link gets close enough, a final jump from the track will cause him to hit Stallord's head, knocking it out of the air and to the ground, exposing its weak point, the Scimitar of Twilight. After a few hits from Link's sword, Stallord will awaken and Link must chase him again. As this stage of the battle progresses, Blade Traps appear along the tracks, first along the column, then along the outer wall. The Blade Traps merely serve as an obstacle to Link's ascension, however, and are destroyed once Stallord comes out of hiding. After several rounds of chasing Stallord's head and hitting the Scimitar of Twilight, the skeletal beast will be defeated, leaving the Scimitar of Twilight, which turns into a Heart Container. 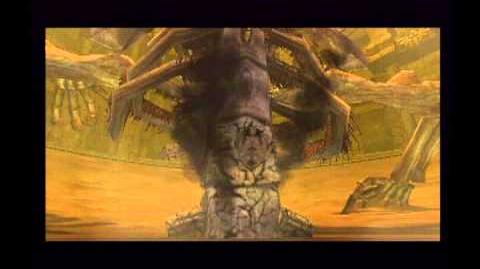 Stallord appears as the final boss of the single-player mode in Fossil Stallord Battle. Stallord looks similar to its Twilight Princess counterpart, but its head now has far more horns, its hands are darker, and it has a slightly different color of shading. This battle takes place in the desert beyond the Arbiter's Grounds (visible in the background) rather than within the Grounds themselves. To defeat Stallord in this timed battle, Link must destroy three red targets, one on each of Stallord's hands and on its head, while avoiding Stallord's fireball attacks and destroying the clouds of Bubbles the beast releases.

Stallord may be the dragon Volvagia from Ocarina of Time, as he was never revived in the Twilight Princess timeline and has a very similar appearance (aside from being only a skeleton), abilities (fire breathing) and the same music. However, this seems unlikely, as Stallord is considerably bigger than Volvagia was, and Stallord is found in the Arbiter's Grounds which is directly across from Death Mountain where Volvagia had lived. There are also physical differences such as Stallord having some hair around its neck, while Volvagia had a mane of flames; Stallord's dental structure differs from Volvagia's; Stallord has ten digits in all while Volvagia only has six; and Stallord has relatively long arms, while Volvagia's in comparison are very short.

Another way Stallord could have been Volvagia is that technically, Link never fought Volvagia in the first place. Due to Princess Zelda sending Link back in time, and Link stopping Ganondorf from taking the Triforce of Power, Volvagia was never killed by Link in the child timeline. Some believe that as a last resort, Ganondorf created a few monsters (one being Volvagia) but was arrested by the Sages. The reason Stallord was in Arbiter's Grounds may be because Volvagia couldn't be killed, so they sealed it inside its chamber to keep it from doing any harm. How Volvagia died however, is a different story. It very well could have been starvation. The vast numbers of Staltroops seemed to wear similar armor to the Knights of Hyrule, so they may have been the warriors that died helping to take down and seal up Volvagia.

There is also a theory that Stallord is King Dodongo, another boss from Ocarina of Time, which is reptilian in appearance, similarly to Stallord. Sections of the music played during the boss battle against King Dodongo are reused during the battle against Stallord. However, this theory is also discredited based on several physical differences (arm length, digit number, general proportion of limbs, torso, hair and head). Also, the Desert and the Mountains are very far apart, and when King Dodongo was defeated, his body was apparently trapped in the magma of his own chamber.

Another possibility is that Stallord was used for execution when the Arbiter's Grounds were still in use, due to Stallord's chamber being situated directly beneath the chamber where those condemned were banished to the Twilight Realm. The chamber itself seems like it was designed so that several people would be placed on the pillar and lowered to the bottom where Stallord would subsequently devour them. Supporting this is the abundance of Staltroops, being animated skeletons, which are theorized to be prisoners killed by Stallord.

Another possibility is that Stallord was simply an unnamed monster killed prior to the game by another hero. Throughout the Arbiter's Grounds, wall engravings show a figure with a shield fighting a large monster, possibly Stallord, which may suggest that Stallord's first death was because of an ancient hero and not of natural causes. Shapes similar to Stallord's head are on all the doors in the Arbiter's Grounds.

The chamber Stallord is found in shares a couple of shapes similar to the Sealed Grounds in Skyward Sword: downward-pointed cone (although this is not the shape of the chamber itself, but rather of the sand during the first part of the battle), and spiral (the tracks Link rides, and the edge of the Sealed Grounds pit). Stallord also has a sharp object embedded in the top of it's skull, a similarity it shares with Demise. It may be that the game's designers intended to infer that the two bosses are somehow linked, or were merely drawing on a previous game for design. The similarities could also be purely coincidental. In SS the Sealed Grounds and Gerudo are far apart, diminishing the likelihood that Stallord is Demise's remains.