"This is an elite captain of the undead soldiers. When provoked, it has the ability to strike with all four of its sword-wielding arms."
— Fi

Stalmaster (スタルマスター, Sutarumasutā?) is a mini-boss from The Legend of Zelda: Skyward Sword. It is a more powerful version of Stalfos that uses its four arms to wield three differently shaped swords and one axe. Two Stalmasters are found in game. One is the mini-boss of the Ancient Cistern where it guards the Whip, and the other is found in the Sky Keep, guarding the Triforce of Courage. The second Stalmaster is assisted by six Cursed Bokoblins.

Initially, the Stalmaster will attack Link using only two swords, while keeping its two unoccupied arms crossed. Link must attack from precise angles like he would against a normal Stalfos in order to penetrate the Stalmaster's defense. After sustaining enough damage, it will unfold its arms and draw two more weapons, boosting its defense. Occasionally, the Stalmaster will parry Link's attacks. Link can disarm the Stalmaster by using a well timed Shield Bash just as it is about to attack, or by luring it into a bomb blast. This will leave the Stalmaster stunned for several seconds, although it recovers much more quickly from bombs than normal Stalfos. As the Stalmaster takes damage, pieces of its armor will gradually drop off. At one point, the Stalmaster's helmet will fall off and break, revealing that he actually has a third eye on his forehead. This will enrage it and it will attack more aggressively, swiping Link every time he misses a sword cut. 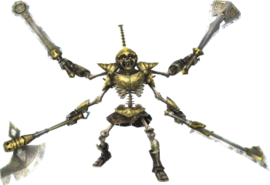 Stalmasters appear as enemy units and their behavior is similar to Darknuts. Like the Darknuts encountered in the game, Stalmasters can be forced into exposing their Weak Point Meter if the player attacks them from the front then quickly dodges behind them, exposing their weak point meter. Stalmaster can throw their weapon in a straight boomerang-like fashion. They are vulnerable to the Boomerang/Gale Boomerang during one of their attacks.

Dark Stalmasters are a Dark shadowy variant that appear as enemies in certain Adventure Mode scenarios. They have the same attacks, weaknesses, and Material drops as Stalmasters.

A special group of Stalmasters called Controller Troops appear as members of Ghirahim's Forces in Linkle's Tale: The Demon Lord's Plan. They are used to control Mini-Imprisoned summoned by Moblin Ceremonial Troops. 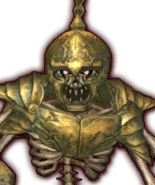 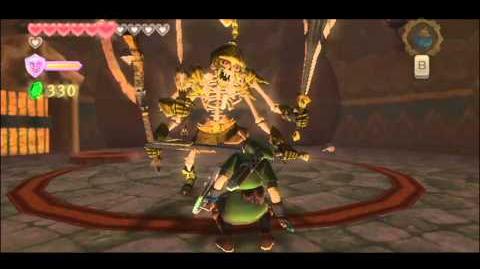